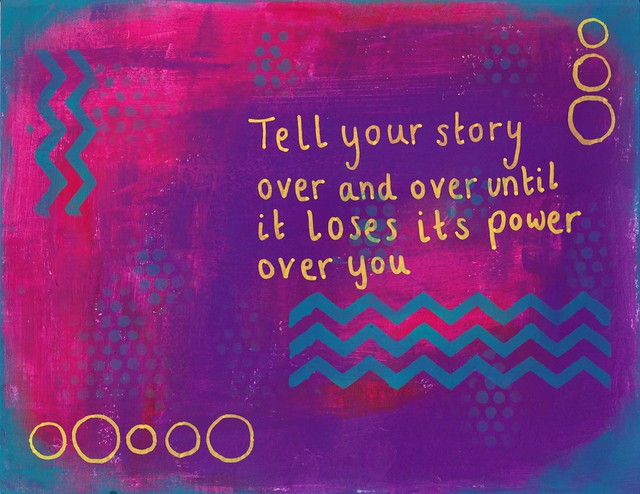 I think we all have things we have difficulty talking about but which are hurting us or holding us back. Even if its something that sounds small or something that happened long ago and even if there is nothing anyone can do to help but listen, telling your story is still an incredible way to release the power that thing has over you. A way to exorcise your demons.

With each telling you are giving yourself a chance to face the issues and process the emotions that come with it.

You are building up a dictionary of words and phrases and they are becoming normal. What I mean by that is it’s so hard to tell someone you have anorexia if you’ve never managed to say the word out loud. But if you’ve used it regularly, it becomes normal and familiar and as easy as saying hello (well maybe not quite).

Talking of familiarity, when we have difficult things in our life, we have a tendency to hide them and pretend that they haven’t happened or aren’t happening. Talking about them means we have to look at them. And talking about them often means looking at them more often and then they become familiar. It takes some of the fear out of them. You know you’ve talked about them before and you’ve been ok. By which I mean you’ve survived. I’m not saying talking about things won’t be difficult, but as hard as it is, most of the time it can’t harm you.

I’m not going to use this post to tell my story, but I would like to touch on ways I’ve told my stories in the hope that it will help someone else:

So tell your story until it loses its power. And in telling your story, you will help others with their own stories.

“Through other people’s stories we start to make sense of ourselves. And there is always more space for more stories. Because no stories are ever the same and no story is boring.” – Meg, That Hummingbird Life

Want to share your story? Link to your blog etc below, or, if that feels too much but you still want to share, email me – hejyork{@}gmail.com.

5 thoughts on “Tell your story”