So folks, we’ve reached the end of the earth suit and are now moving onto air.  Before we get into the individual cards, I thought I’d say a few things about the types of animals in this section. 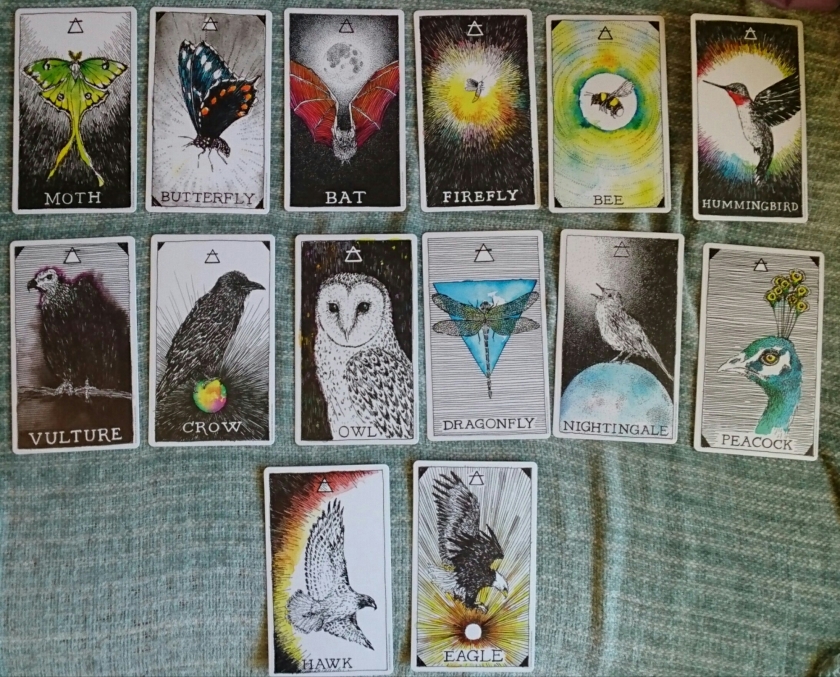 The suit of air (swords in tarot) is associated with the mind, mental activity, with clarity and with communication.  These cards reflect the intellectual part of you, the thoughtful and logical aspects of the world.

Birds, in general, are flying creatures with feathers which are used for flight, communication, attracting mates and camouflage.  They build nests and lay eggs and are found on all the continents.  They have lightweight bones, toothless beaks and very complex respiration systems.  Many species migrate over long distances.  Many birds are social animals living in groups with the ability to communicate.  Most scientists agree that the bird has evolved from the dinosaur

We shall see in more detail for particular species but birds play prominent and diverse roles in religion and mythology, for example acting as messengers.  Many goddesses have birds as companions and some can even turn into birds.  Their ability to fly means they are often associated with freedom, ascension and closeness to god/spirit world/etc.  They also get a birds eye view of the world, allowing them to see the bigger picture.

Whilst you may be familiar with the phrase bird brained meaning stupid, there is evidence that at least some species, such as the crow, are highly intelligent.  I like the use of birds to illustrate the mental realm and communication – after all, we used to use feathers to write with and they talk using beautiful songs.

What is an insect?  Insects are invertebrates which have a three part body (head, thorax and abdomen), three pairs of jointed legs, compound eyes and a pair of antennae.  They are incredibly diverse, there are estimated to be between six and ten million species which inhabit nearly all environments.

Most insects hatch from eggs and because they have an exoskeleton, most have to go through a form of metamorphosis in order to reach their adult state.  Some get around by walking, others, which we will focus on in this section of the cards, fly.  Some even swim.

On the whole, humans see insects as pests although, as with all animals, they have their own role to play in the web of life.  Indeed, many insects are crucial to our own survival.

Whereas the bird can see the wider view, insects, because of their size are likely to see a much more detailed, close up view of things.  Both equally important for us.

Because of the diversity of both birds and insects, we shall consider their more specific characteristics in more detail in future posts.