Like the tiger, there is so much that could be said about the elephant but I will try to just touch on points rather than going into great detail – if something resonates with you, find out more.

A fun fact (possibly, I have no evidence) is that despite their great size and strength, elephants are afraid of bees.

You are probably familiar with the key features of these giant land mammals – their huge ears, their long trunk, the tusks which make them vulnerable to poachers, their comparatively tiny eyes which make their vision poor… There is so much to take in when you see an elephant.

I am reminded of the tale of the blind men and the elephant.  What you perceive is only part of a whole, the view may be completely different from where someone else stands, even if they are right beside you.  We are also reminded in this tale that sight is not a sense available to everyone.  The elephant, with it’s poor eyesight, relies much more on its other senses.  As I’ve mentioned before, we tend to be a very visual society and the elephant is asking us to play with our others and not just rely on what we see.

That fact alone is pretty fantastic but the trunk just gets better and better…  Elephants use it in many ways:

How awesome is that?!  And this adaptability, flexibility and making the most of what you have is something we can all learn from.

They also have what’s called a pharyngeal pouch at the base of their tongue which can store up to a gallon of water for emergency use.  A good reminder to always be prepared!

Sort of related to senses, are the tusks.  Tusks are overgrown teeth (hence vaguely related to the sense of taste).  For African elephants, both males and females have tusks whereas for the Asian elephant, it is only the males.  The tusks can sometimes look a bit cumbersome and certainly are the main reason why elephants are in danger, with ivory selling for exceptionally high prices.  If you want to know more about this, watch the ivory game (on netflix at the moment).

So, why have tusks?  Well, they are used to dig for water and food, they are used to mark trees, they help the elephant to clear debris such as branches from the path and they are used in fighting.  There are apparently reports of elephants trying to hide their tusks when humans are around… a sad state which tells us lots about the poaching industry as well as the intelligence of this animal.

The tusks and the trunk do mean that elephants are excellently equipped with their own built in tool kit.

Matters of the heart and mind

Elephants are social animals for whom family is very important.  They are sensitive, compassionate and loyal and are regularly seen helping each other out.  They spend most of their lives in single sex groups, meeting up for mating.  The female herd is led by one of the oldest elephants and great respect is shown for her.  This elephant will have a mental map of migration routes which has been passed down from generation to generation.  Our society on the otherhand is one which is increasingly devaluing our elders, disparaging the wisdom of age and disconnecting from our ancestors.  This may be asking you to reflect on that.

Male elephants are a symbol of virility and firey passion, given this perhaps our elephant is a male?

It is said that the elephant is a symbol of chastity – they have a gestation period of over two years and once they have given birth, they don’t have sex again for 3 to 5 years.  During this time, they are devoted to motherhood and teaching their baby how to be an elephant.  Other members of the herd will join in with this and show mum how to help her baby if need be.

Elephants are said to feel emotions deeply and to grieve for lost family members.  There are also stories of them helping out people and animals of other species including standing guard over injured people, proving shade and protection.

In addition to a big heart, these intelligent and endearing creatures have unusually an large hippocampus, the part of the brain which deals with memory, so the elephant may indeed never forget. 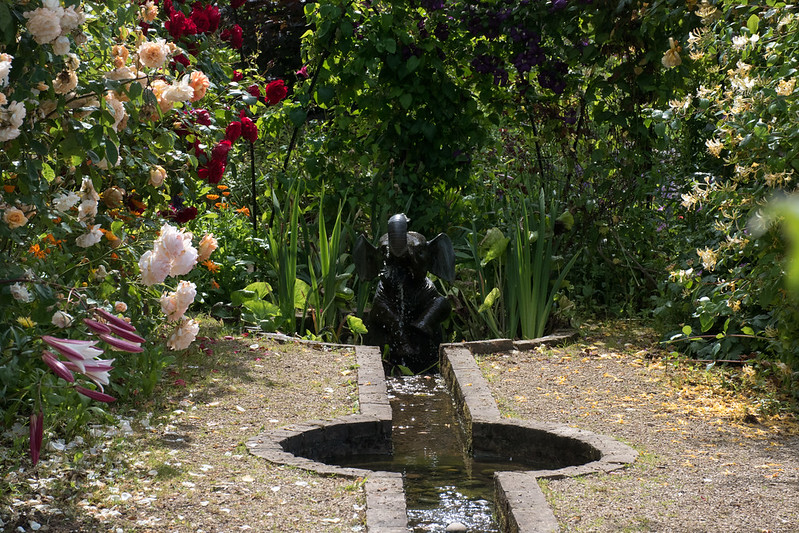 In some parts of Africa is was believed that the dead would return as elephants, again tying us to the idea of our elders, our ancestors and respecting their knowledge and wisdom.

In terms of Asian beliefs, elephants are associated with lightning.  For example, Airavata, a great white elephant from Hindu mythology, could fly, call down thunderstorms and create rainbows, surely a sign of their power.  There is also Ganesha, a god who could remove obstacles for people which stand in their way of success.  Buddha is said to have been a white elephant before being reincarnated as a human, a sign of their gentle nature perhaps?

In the west, where such animals weren’t seen, they were viewed as an emblem for the weird, unusual and a bit useless, hence our phrase white elephant.