There are about a trillion different kinds of fish. To me, this seems like some kind of carp but I have very little knowledge about these things.  If you do know what kind it is, please let me know in the comments.

The red crescent was a symbol adopted by the red cross in some parts of the world and is still used by 33 countries. 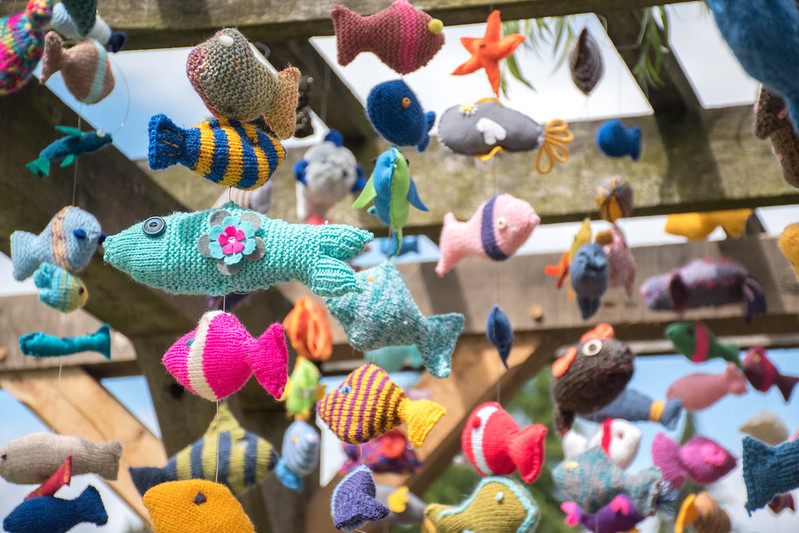 Fish are probably the iconic creature of the water and whilst there may not actually be a trillion types, there are a lot.  The biggest being the whale shark, over 12 metres, and the smallest being the Paedocypris progenetica, a type of carp, at a mere 7.9mm.  Fish range from brightly coloured, to highly camoflaged.  Some live alone, others in schools.

This huge variety makes this card one of the harder ones to understand I think.  When you draw this card, think about what fish mean to you.  If you’re a diver you probably have a very different relationship to fish than someone who lives inland and nowhere near lakes and streams.

Whilst we all intuitively know what a fish is, a more technical definition is “a limbless cold-blooded vertebrate animal with gills and fins living wholly in water.”  Water covers 2/3 of earth, mostly in the form of seas but also freshwater streams, rivers, lakes and so on.  And fish can be found in a lot of these habitats, at all depths, although most stick to salt or fresh water.  I think this epic diversity is an important aspect of this card.  Perhaps as a reminder that we all have a place to play in the ecosystem, or to respect diversity or to just be who we are.

They have been the same for 100 million years and were the first creature to develop a spine which would turn out to be a key evolutionary development.  The basic features of a fish include scales, fins, a skelaton, gills, a swim bladder and a lateral line which feels changes in water pressure and movement.  Most use an s shaped wiggle to move through the water.

Whilst we often consider fish as somehow more primative to us, most of them do have highly developed senses – after all, they’ve had a lot longer than us to develop them.  Daytime fish often have colour vision at least as good as ours.  Many have great sense of taste and smell and they use their lateral line to hear with as well as their ears (which don’t work so well).  The lateral line gives the fish a way of detecting movement and vibrations around them and feels a bit like a sixth sense and a reminder to listen to your body.  Some fish can detect electric currents but as this is a key part of the shark, I’ll focus on this ability when I get to that card.

The fish features heavily in christianity but also has symbolic meaning in many religions.  In Buddhism for example, the fish is a symbol of happiness; they can move freely through the water without fear of drowning in the ocean of suffering.

Some gods take the form of fish including shark gods which we’ll look at with the shark card.

Going back to their habitats, they can be found at all levels of the sea and are able to withstand vast pressure in the depths, much greater pressure than we can cope with without technical equipment.  Think about this from an symbolic perspective, do we need assistance to dive deep into our emotions?  Do we need to channel fish energy to help us handle the pressure?

As masters of water, fish can help show us how to navigate the currents in life and our emotions.  I’m wondering if a fish visualisation would be one way of approaching this.  I’m thinking of imagining myself as a fish and seeing what the water around me looks and feels like.  Does it feel stale?  Do I feel trapped?  Do I feel like the oceans are there to be explored?  I did once dream I was a fish but I was for sale at a market… And actually, thinking back, it was probably very telling of my emotional state at that point in my life…

The fish is also a symbol of cooperation, I imagine this is based on the shoals of fish who work together for their safety, almost as one super organism.  It could also come from the ecosystems that arise around some fish.  For example when little fish clean bigger fish.  Again, we see that having support helps us as we enter the watery world.

Talking of shoals, they tend to have one breeding male and then when they die the lead female changes sex and takes it’s place.  Interesting right? Apparently it is also a major flaw in Finding Nemo…  This flexibility is echoed in the way fish move and often increasing flexibility in our thinking and our habits can make a huge difference to how we experience our lives.

There seems to be a lot of superstition and belief around the fish.  For example the haddock was apparently considered lucky in Scotland.  The salmon are considered an ancient and wise creature in Celtic folklore.  A lot of fish swimming near the surface are supposed to fortell bad weather.

In terms of astrology, we have Pisces, the last sign of the zodiac, the fish.  Pisces is a symbol of rebirth and regeneration, completing the astrological cycle.  It is said to hold qualities of all the signs but is most associated with emotion, intuition and dreaming.  The symbol of Pisces is two fish, tied with a string and swimming in opposite directions.  One possibly heading to the heavens and the other more focused on material issues; or one focused on spiritual matters and the other on reality.  It also has a strong tie to the moon which as we’ve seen before represents the unconscious and thus ties in very well with the water element and the fish who dwell there.  Indeed, the moon is thought to be an influence on fish and some species will only mate during certain moon phases.