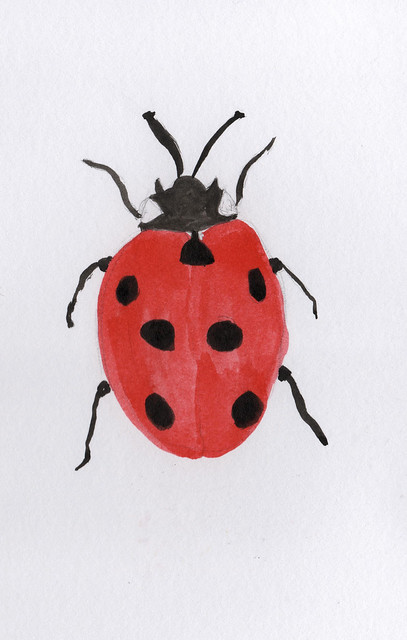 In the ladybird, we find another shelled creature but unlike the tortoise and the snail, the ladybird takes to the air.  She has her protective shield but she is not afraid to use her wings to fly.  Perhaps this is because her colouring marks her as dangerous, tells us to stay away from her so she feels confident to go about her life as she wishes.  There are clearly pros and cons of this, staying safe and feeling safe are important but if we push everyone away before we give them a chance to get to know us or us know them then we miss out on the relationships which add such value to our lives.

There are so many names for the tiny insect but one consistency seems to be their association with luck.  The Lakota people believe that if a ladybird touches you then flies away it is travelling to your future partner.  They are used to predict how good the harvest will be – the more spots the better the harvest.  This actually makes sense because the more spots a ladybird has, the better they tend to be at controlling aphids and thus increasing crop survival.  Because of this, it is said that the more spots a ladybird has the luckier it is.  Another spot related belief says you should count the number of spots and this will tell you how many happy months you will have from that day.  If a ladybird flies into your life, you may want to consider the numerological meaning of the number of spots.

These charming creatures are not just a messenger of future good fortune, they are often believed to be associated with our ancestors and our past lives.  If you believe this, perhaps they are bearing a message from a relative, from another existence or from another time within your life.  It may also be a call to reflect on those who came before us, related by blood or not.

Like a lot of animals, they feature as a symbol in Christianity.  In this case as a representation of the virgin mary.  The name ladybird comes from “our lady’s bird”, referring to mary who was often depicted in a red cloak.  The spots on a seven spotted ladybird represent her seven joys and seven sorrows.  Regardless of their sex, we call them ladybirds so we should be focusing on the feminine.  This will mean different things to different people but in general it tends to be a symbol for mothering, for nurturing, for emotions and for creation.  Intuition is also often considered to be a female quality.  The ladybird, like many small creatures, feels the vibrations of the earth through her legs.  She can learn a lot by listening to what her body is telling her.

Ladybirds go through metamorphosis, starting life as one of hundreds of eggs before hatching into a larvae which grows rapidly and sheds its skin a few times.  They then pupate for a few days before coming out transformed into the ladybird in its adult state.  This whole process is fairly quick, taking just over a month or so.  As we saw with other insects, this can signal a time of change and you might want to have a look at the wild unknown butterfly for more about this.

The process of transformation works well as a metaphor for creation.  We start out with hundreds of ideas, too many – they can’t all come to fruition.  We then hatch some of this, test them out, see how they work.  Not all of them will survive.  Those that do will change shape a few times.  There is then likely a period of rest, a breathing space, whilst we decide whether the creation is complete.  If it is, it is one of the lucky eggs that becomes an endearing ladybird.  Look at what you are creating or bringing into existence, look at your creative process, does it embrace the different phases of creation or struggle against them?