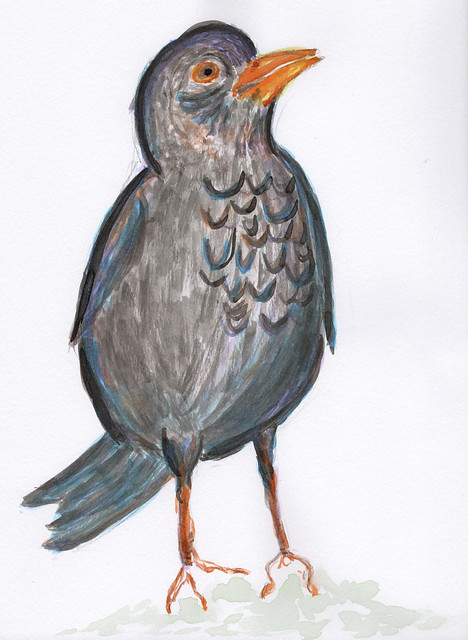 The blackbird* has indeed got a beautiful song and it’s music is used by the males to establish territory, a much better way than fighting.  If you need to establish your own boundaries, try using your sweet words and see how much further you might get.  If you find a blackbird feather in your path, it allegedly means some of the poetry, music and inspiration of the blackbird is coming your way.  But don’t fret if there is no feather, having a blackbird near your home is good luck and you also get to listen to their tunes which is a bonus.

There are two aspects of blackbird lore which I find particularly interesting. One relates to Rhiannon and the other to blacksmiths.

It was said that Rhiannon had three blackbirds which accompanied her and they could sing the dead back to life or lull the living to death.  It is perhaps this ability which means they are often seen as gatekeepers between worlds, in this case between the world of the living and the world of the dead, but also between the rational and the irrational, the mundane and the spirit.  They are also said to carry messages between these worlds so if you’re seeing a lot of a blackbird, it could be someone who has died trying to reach out to you.

This place as gatekeeper also gives us a pivot on which change occurs, a liminal in between place, a transitional place.  To me, this evokes the process of alchemy, the changing from one thing to another. And with that, I find it easy to see why blacksmiths and blackbirds come together.

The blacksmiths have a magic of their own, bringing together elements to make something quite different.  This feels a bit like the role of the magician or the temperance cards in tarot.  They forge a new creation by combing the four elements.  They are creative, they are mystical and they use their skills to make tools which would have been vitally important in the past.  We can all work magic of our own kinds but we have to have the confidence to step into the unknown.  There is a healing power in bringing together aspects of a self or aspects of our world to create something new but this requires us to trust in something we can’t see; imagination, intuition, magic…  We need something from one world and something from another world and who better to ask than the gatekeeper for help?

*the females are brown, I’m going to assume a man named the species…

One thought on “Blackbird”