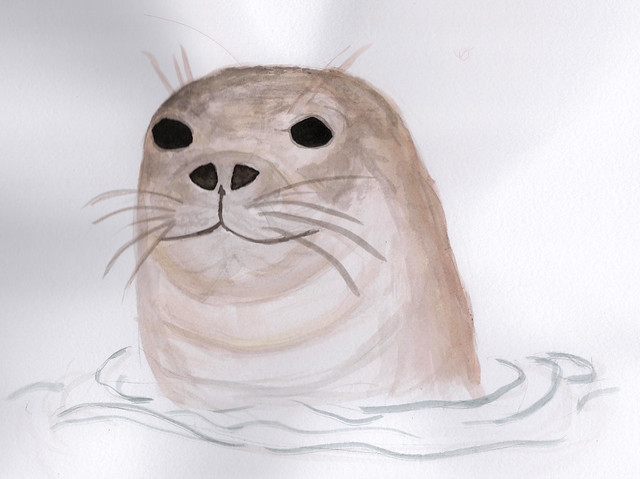 First let’s deal with the seal vs sea lion issue.  They are related species but they are not the same creature.  Some literature on animal spirits or animal guides will lump them together but I feel like they have some different attributes so here I will be looking at the seal not the sea lion.

Despite their cute appearance, seals are actually one of the seas top predators.  Males in particular can be violent, territorial and warlike.  When they are out of their environment, for example if they’ve been captured, seals become aggressive and defensive.  As I think would most of us.  On the other hand, in the water where they belong and are free, they are inquisitive, endearing and at one with the environment.  This doesn’t mean they won’t become violent if you make a wrong move but they feel much safer in their home habitat.  Here they feel comfortable enough to explore and be curious and playful.  Feeling safe is something that is very important to me (probably most of us).  I need to feel safe in order to feel anything and to truly be myself.  There are certain places I feel safe and certain people I feel safe with and knowing this is important when it comes to emotional work.

As a creature of the water, the seal knows all about self reflection, feelings and healing.  They are deep divers, grey seals can hold their breath for over 20 minutes and dive to at least 300m.  Further, they are adapted to be able to navigate this space with ease.  They have large eyes and powerful eye muscles, letting them see well in low light.  They have excellent underwater hearing and very sensitive whiskers which also help them when they are exploring the deeper waters.  In the same circumstances, we would be blind and lost.  Use the seal’s senses to see into your own emotional depths.  Like the seal, clear your vision with tears, let the salty water cleanse you.

When it comes to giving birth, these graceful water creatures must come to land where they are considerably less agile.  They pack closely on the beach to mate and give birth, typically to one seal pup.

As a mother, the seal produces some of the richest milk in the world.  Her pups are born not knowing how to swim and so they must spend the first portion of their life in the liminal space of the coastline.  Here the sea creature becomes a land animal, temporarily.  They live in the in between space of the shore.  Neither one thing or another.  Much like the selkies of ancient myths.

The selkie is an important part of understanding the seal’s messages.  Whilst the animal does change in different cultures, sometimes featuring an otter or similar, the essence of the myth remains the same:

Selkies live in the sea as seals but can shed their skin to become human on land. Generally a female selkie is coerced into a relationship with a male human who has stolen their sealskin.  This means the selkie can’t return to the sea.  The tale often goes that the man bargains with the selkie and says after seven years he will return her skin and she can chose then whether she wants to return to the sea or stay with him.

Sharon Blackie writes beautifully about selkies in her book, If Women Rose Rooted:

These selkie tales resonate strongly with women, for the selkie’s song is our song.  It is a song of yearning – yearning for a part of ourselves that we feel we have lost – or maybe a part that we feel we might once have had, but never knew.

The selkie story is the story of a woman who breaks.  Taken literally out of her element, trapped on the land, where she cannot find a way to belong.  She has lost her place in the world, and consequently has lost her stories.  Like the selkie, so many of us lose our skins, and all too often we lose them early.  This can happen in so many ways; it may be stolen by another who does us harm; we might give it away to someone we trust, who then betrays us; or we might hide it for safekeeping and then forget where we hid it.

This resonates so strongly with me.  As awful as my anorexia, depression and physical ill health has been, it has also been a process of refinding my skin.  I lost it a while back to the shoulds and musts of the world and other people’s ideas of who I was.  I am still refinding myself but I know I am on the right path, I know I am on my path.