I wandered lonely as a Cloud
That floats on high o’er Vales and Hills,
When all at once I saw a crowd
A host of dancing Daffodils;
Along the Lake, beneath the trees,
Ten thousand dancing in the breeze.
– William Wordsworth

To me, and many others, the daffodil heralds the arrival of spring.  Here in York, these triumphant flowers line the banks of the city walls, declaring that the sun is growing stronger and the days longer. 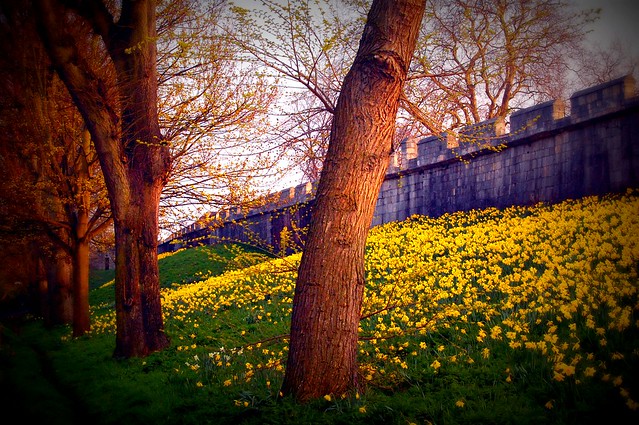 The daffodil is also the flower of Wales, the symbol of St David’s Day, the emblem of annunciation, the flower of Easter, known also as the lent rose or lent lily.  As the frosts clear, their tapering green leaves start to push through the fertile soils.  This is truly a spring time flower.  As such, the daffodil is a symbol of creation, of birth, of life, of energy, of the sun.

However, they are also considered bad luck and bringers of death.  And should you attempt to eat it, death is a very real possibility.  They are toxic to humans and animals, causing stomach ache, nausea, vomiting and diarrhoea followed by trembling, convulsions and paralysis.  Death may follow depending on how much has been consumed.  So toxic is the daffodil that it is said that Romans carried a bulb when they went to war.  If they were critically injured, they would eat it in order to have a merciful death; the narcotic properties of the plant would numb their pain as they died.

And it’s not just humans and animals that can be affected by the daffodil.  If they are planted near certain species, including roses, rice and cabbages, the growth of the species will be inhibited.  If you are arranging cut flowers, the toxin from the daffodil will shorten the life of any other flowers you include.  Their delightful, sunny demeanour hides a dark side…

In terms of folklore and beliefs, you should tread with caution when walking around a bed of daffodils. If you step on a bed of daffodils, bad luck will follow.  Never bring a single daffodil into a home as it will result in misfortune.  If you do give daffodils, make sure it’s a plentiful bouquet as this brings luck.  However, if you have chickens incubating eggs, don’t bring any as the eggs will not hatch.

Spring was an important time of year for our ancestors, the success of your farming could literally mean life or death later in the year.  If your eggs didn’t hatch, you lost a generation of chickens which meant you didn’t have the eggs or the chickens to eat.  If your crop didn’t start life well, you wouldn’t get a good harvest.  This is a time for setting our intentions, planting our seeds, and we need all the luck we can get.

Many people will be aware that the botanical name for the daffodil is Narcissus.  It seems that the name of the plant is unrelated to, and possibly predates, the myth about Narcissus but I think it’s worth exploring anyway.

Narcissus was a hunter who was renowned for his beauty and very proud of it.  One day he looked into a pool of water and saw his reflection.  So gorgeous was the image that he fell in love, like many had fallen for him before, and became obsessed.  He could not bear to leave the reflection, even for a moment, and eventually he died (some say he starved, others that he drowned).  It is this tale which gives us the term narcissism; a fixation with oneself and one’s physical appearance and/or public perception.

For some, this means that the daffodil is a symbol of vanity.  I prefer to think of it as a caution against fixation, of any kind.  Focusing all your energy on any singular thing is not good for the mind, body or soul.  We need many different interests, focuses and types of stimulation.  We are complicated creatures, we are multifaceted and we must meet the needs of the different parts of us.

Do not eat any part of the daffodil.

None of the above should be considered medical advice, do not eat anything unless you’ve done your research.  Plants go by different names in different places and have different properties at different times of year.  Some of the possible uses of this plant have come from folklore and should not be taken as fact.