I was planning on including some information about extinction but time has run away with me and it’s almost time to move on to plants and humans.  But first, I want to briefly poke a paw into the bestiary.  The popular medieval text which compiled information about so many species that were thought to exist. 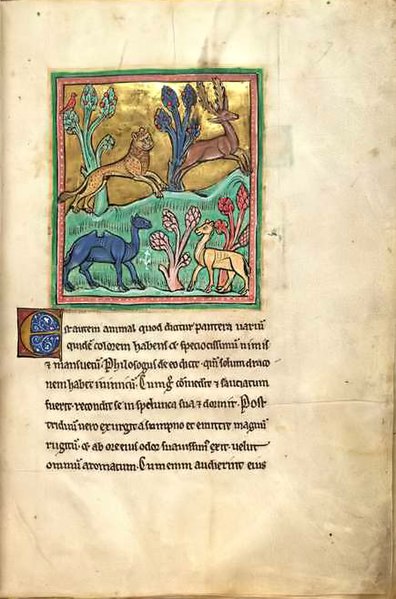 They are beautiful books which include images and text about animals, plants and even rocks.  As well as accurate observations, they included fanciful suggestions and content reach the bestiary second, third… tenth hand through travellers, storytellers, explorers etc.  The earliest known bestiaries date back to ancient Greece but they had their heyday in the middle ages and I’m using a copy from the 12th century which was later translated from Latin to English.  These medieval versions drew on earlier documents and thus fictional, or semi-fictional, accounts were amplified, as were the middle ages version of the typo.

However, it is argued that the reality of these creatures did not matter so much as the text provided moral lessons and  religious teachings.  St Augustine apparently even said that it didn’t matter so much if the animals existed, what was important was that people knew what they meant.  In this sense, the bestiary feels more like a symbolic dictionary of sorts.

This was a time when it was believed that everything on earth had a rational purpose, that it was put there with the creator’s intent.  As such, everything meant something.  All the plants and animals around you were messages from the divine.  Even their names were meaningful, and the bestiaries do use names to extract ideas about the species.

“The name wolf (lupus) comes from the Greeks, who call the animal lukos, this word also indicates the morals of wolves which rapaciously kill whatever they encounter and always desire blood.  Some say lupus is from leo-pos because like the lion the wolf has its strength in it’s feet.”

It was a book which, on the whole, revered the wonders that God had created and praised their abilities.  Animals were also created to teach humans lessons; the pelican, like Christ, was said to revive her dead young with her own blood.  Some animals show how you should care for your children, others how you should care for your elders.  Some show the importance of staying within the safety of the church.

Some animals may have been made up in response to the belief that all land animals had an equivalent in the sea.  As such, even though there may be no evidence for them, the idea of mermaids and mermen made sense.  And why not, given that the bestiaries also included unicorns and manticores (portrayed in a number of ways, including as a beast with a man’s face, a lion’s body, and the stinger of a scorpion).

Whilst it is easy to mock the creators of these fascinating texts, I bet they wouldn’t believe some of the things we know to be true today, fish which change sex for example.