Before we move from animals to plants, I want us to pause a moment at that strange in between world.  The world where it isn’t clear whether something is animal or plant.  The strange world of the hybrids and the chimeras.

In this liminal space, we find animals which photosynthesise and plants which hunt and kill their prey…

The Lamb of Tartary

A peculiar animal plant, the Lamb of Tartary grew out of the ground and created a lamb which was tethered to it via an umbilical cord.  This bizarre being is described and depicted in the 14th century but also as late as the 1800s. 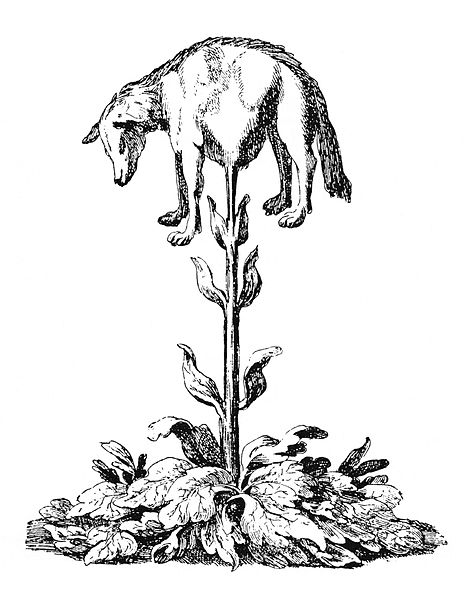 This mythical creature possibly arose when explorers from the west first stumbled on the cotton plant.

The green sea slug is unusual in that it produces chlorophyll and can photosynthesise.  Both traits which are generally used to define a plant…

The Mesodinium Chamaeleon is a ciliate.  Most ciliates get food by eating other organisms, like animals do.  Some species of ciliates however engulf microorganisms like algae and form a partnership.  The algae produce sugars via photosynthesis while the ciliate protects then and transports them.  This partnership creates a sort of hybrid creature.

But the Mesodinium Chamaeleon is a bit different.  It engulfs algae and protects it, allowing it to create sugars but then, after a few weeks, it eats the algae.  So this peculiar specimen is somewhere between animal and hybrid…

“Sensitive plants approach very near to the animal kingdom… because these plants, when irritated ever so little, show a kind of sensation of motion”
– James Ellis, 1768

Historically, one of the defining differences between plants and animals was that the latter could feel.  Then came along the mimosa plant.  Something which looked very much like a plant but also clearly responded to touch and hence could feel.  We know a lot more about how this works today but for 18th century botanists, it was a rule breaker, it transgressed the boundary between plant and animal.

In a similar way to the mimosa plant, the venus fly trap posed a problem.  It came to Europe in the 1760s and in doing so, messed up the great chain of being.  Beings lower down couldn’t eat those higher up and plants were below flies…  Further, since sensitivity and being able to feel were fundamental in the classification of plants and animals it challenged the way science had ordered the world.

Whilst today, we know that the mimosa plant and the venus fly trap are definitely plants, they must have planted doubt in the minds of some about the existence of a plant-animal.

The tunchon flower from China was alleged to create the tunchonfung, a bird which could die at the same time as the flower.

Similarly, but closer to home, we find the barnacle tree which was said to give birth to barnacle geese.

The root of the mandagora is known as mandrake.  It was well known that if you pulled up a mandrake root, the plant would scream and scream and condemn you to hell.  There were various ways of avoiding this which included getting a dog to pull up the root or bathing the root soon after.  It was said that the root looked like a man, with two legs, a body and a hairy top and thus they were used in superstition and magic.

However, John Gerard, writing in 1597 already knew how to make counterfeit plants and other sources suggest this practice had been underway for some time!

Whilst not all of these strange hybrids are real, they do tell us a lot about the history of the science of nature and the way the natural world was seen in the past.

One thought on “From animals to plants?”