This month I’m considering plants, but I’m not going to dwell too long on trees as trees and forests seem to dwell in a specific niche of literature which is an interesting focus in itself.  I will return to enchanted woods and trees later.

But first, let’s get a feel for the plant world.  We say plants but it is a categorisation which covers such diversity and various stages of evolution.

Once upon a time, in a land not so far away, everything was barren.  This was 4.5 billion years ago.  By 3.9 billion years ago, the first signs of life were appearing, single cell organisms.  It took until 2.7 billion years ago before the bacteria began producing oxygen.  A critical point in the history of this land for without oxygen, the future would have been very different.  Oxygen levels rose and rose and by 541 million years ago multicellular life appeared.

These plants weren’t like the beautiful roses and tulips we know today. They were bryophytes.  They had moved out of the water in search of more sun, more carbon dioxide and more nutrients but doing so was a risk because the water was the only home they knew.  They reproduced in the water and leaving it came with the risk of drying out.  So, these bryophytes had to adapt, and they did so by covering themselves in a waxy layer called a cuticle.  This stopped them from drying out which was really helpful but they had to stay near water as that’s where they still reproduced.  And they couldn’t grow very tall because they didn’t have a vascular system to pump water around them. 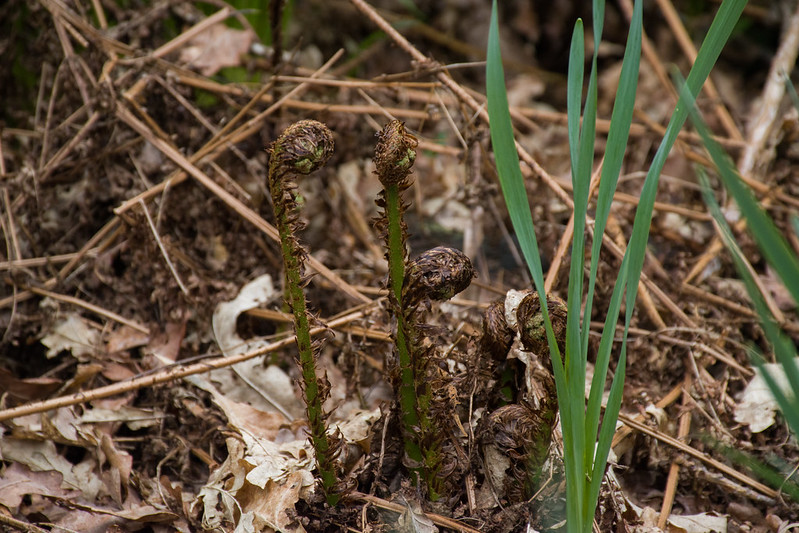 Next to appear in the landscape were the ferns. Like the bryophytes, they still reproduced in water but they had developed a vascular system which pumped water from roots to shoots and upwards.  This allowed them to grow a lot bigger.  But still, plants congregated where water was available as it was their only means of reproducing.

A huge development 320 million years ago changed the landscape dramatically.  Seed plants had arrived.  And with the creation of seeds, plants could now roam further than they had been able to before.  These plants, gymnosperms, had also developed needle like leaves which helped retain water.

These plants lived in a very different world to ours.  It wasn’t until 250 million years ago that the ancestors of dinosaurs and mammals started to appear on the scene.  And whilst the land was now increasingly covered in plants, there were still no flowers.

The dinosaurs, dominating the planet from about 230 to 65 million years ago, started life in a land of ferns and seed plants but by the time they left, flowers were taking over.

Flowers and fruits didn’t appear on the scene until 135 million years ago.  These had the protective cuticle, they had the vascular system which was so important to size and they had the seeds of the gymnosperms.  But instead of having naked seeds which were reliant on the wind, the angiosperms had attractive fruits and flowers to lure animals into helping with their reproduction.  These plants would become the most diversified of the plant world.

Tomorrow I’ll be looking at a more recent change in the landscape and to the distribution of plants, that of gardening.