One of the important and closest ways that many of us engage with plants is through gardening.  Gardening has been a very popular pastime and continues to be today but within the sphere of gardening, tastes change, climates change and new plants arrive in the UK.  The way we relate with our gardens and with plants has changed over time.  For example, during the unrest around the time of Viking raids, there was not the time or resources to garden beyond food cultivation.  Whilst I’ll touch on growing crops, I’m focusing a lot more here on gardens as something beyond necessity.

“Gardens are always unfinished, telling a long story of immigration and connection and transformation”
– Jenny Uglow

The history of gardening is fascinating and tells us so much more than you might think on the surface.  Of particular relevance to my nature and writing project, is what gardening trends tell us about changing attitudes towards wildness. Gardens are bounded spaces which we allege to tame but which nature is constantly trying to reclaim.

The dates below are rough, a note which should apply to most of my blog posts really!

The Romans, when they invaded Britain, brought with them the idea of planted spaces purely for enjoyment.  Prior to this, it seems that plant growing was primarily for food, medicine etc.  At this time, gardening was very fashionable in Rome and plant hunters were already competing for the joy of being able to claim they had the most interesting or most exotic plants.

Moving forward to the 800s-ish and the Saxons, we find very little evidence about what was happening in Britain in terms of gardening.  But we do know that gardening was happening in monestaries in Europe so was likely going on here as well.  In about 800AD, Alcuin of York sent plants to france and it is thought they were destined for an abbot who went on to draw up a document which said that evry city should have a garden and specified the types of plants, flowers, herbs and trees which should be contained within it.

In 815-20, a plan for the ideal monestary was created, the St Gall Plan, which contained space for growing food, medicine and also gardens.

By the 12th century, we see parks, orchards and allotments as part of manor houses and monestries.  We also know that gardening was important to monks and they would exchange seeds with other monestaries.

The word lawn comes from the 13th century and applied to the smooth green of the clositors, places for peace and contemplation.  At this time, walled gardens and little parks were increasing in populatiry.  The latter would be used for walking, for your ornamental plants and for animals.

At this time, gardens for pleasure were becoming more saught after and townsmen were starting to establish their own as a sign of status.

In 1260, we find a definition of a pleasure garden.  It needed a fine lawn, fragrent flowers and herbs, benches and ideally a fountain in the centre.  They were usually swuare or rectanglular and were a felight for the senses.  The use of herbs, especialy near paths was interesting useful – they were thought to keep vermin away and as women in huge skirts walked past, the fabric would rustle against the herbs and release lovely scents.

The 14th and 15th centuries weren’t easy times.  There was war, plagues, faminines and discontent.  Gardens, without anyone to tend them, became neglected and overrun.  But for those who could continue to afford the skills of hardeners (who were becoming specialists by this time with increasing knowledge), gardens offered a respite from the difficulties of the world.

Following the black death, landowners found they couldn’t get the labour they needed to make the most of their land.  This helped to give birth to the cottage garden.  Portions of land were leased out and tenants would use these to grow food but also to grow plants for their own sake.  At this time, city vicars are also able to have access to gardens so they could grow produce for themselves as well as flowers for the church and for festivities.  As new towns were developed, homes were given space for gardens.

Taking advantage of these trends, nurseries were starting to crop up along with books about gardening.

The Tudors ushered in an age of beauty and pleasure, especially with Henry VIII who beautified his palaces inside and out.  His gardens were filled with sundials, statues of bright colours, topiary beasts, fountains and painted benches.  It was around this time that gardening began to be discussed in court circles as a form of self expression.  Your garden could demonstrate that you were wealthy but also that you were a person of reason and also imagination.  Gardens grew more elaborate with mounts, arbours and summer houses as well as fish ponds and fountains.  There was space for garden games, archery, bowls, tennis and the like as well as mazes and knot gardens.  They were fancy and most importantly, they were controlled.  They showed the mastery of man over plants.

As travellers and conquerors headed out into the world, the range of plants in the UK expanded and changed from primarily green, leafy plants to those with vibrant flowers.  As the tutors gave way to the Stuarts, gardens got increasingly elaborate with the addition of automata, grottoes and islands.  Whilst this was obviously only the case for the rich, more ordinary people were also taking pride in their gardens and many farmers wives enjoyed their flowers for their own sake, not just for what they could be used for.

In the 1640s, gardens became a retreat from war but by the 1690s a lot of gardening was strictly practical.

By the 1700s tastes were changing.  Gardens had been expensive to maintain and at this time money was tighter so a more natural style was ushered in.  To support this, it was declared that only people of less intellect and status could enjoy the fanciful gardens of the past and that those who were truly intelligent like nature far more.  Which was very convenient.  And was probably a backlash by the upper classes as the trends that they had set were now being followed more widely.  Over time the gardens softened, became less formal and the barrier between garden and country was less severe.  A picturesque landscape and parkland was born and Capability Brown had an important role to play.

Whilst these gardens looked natural, Brown carried out a lot of work which ultimately would go unseen.  He changed the waterways, planted fully grown trees to give the illusion that they had always been there and very much played on the idea of the country idyll vs the corrupt town.  He was a practical man who worked to reclaim land from marshes and bogs and make it usable.  However, he didn’t let much stand in his way and if it didn’t fit his image, he would essentially kick people off the land.  This reflected wider practices and between 1760 and 1800, over 21 million acres of open fields and common lands were enclosed, something which would radically transform the landscape.

This was also the start of the age of romanticism with poets like Wordsworth writing about the value and beauty of nature.  So we can see how ideas about gardening were reflected in wider culture and how culture was reflected in garden trends.

The era of the Victorians saw rockeries grow in popularity and the plant hunters of the day had a huge impact on gardens.  Established plants were now joined by exotic and wildly colourful flowers.  Flower competitions were being established and many raised money for charities.  It was in 1834 that the Language of Flowers was translated into English and it reflects the popularity of flowers and the feeling that flowers were more suitable for ladies than vegetable gardening.  This would shortly begin to change however and digging and planting began to be taken on by women.

In reaction to the landscape movement of the 18th century, the 19th century saw a return to the more formal gardens with statues and lots of water and pots.  We also see the increase in popularity of the hothouses and greenhouses, essential for keeping exotic plants alive.  Glasshouses grew in size and became more ambitious.

It was in the 1800s that the public park came into being.  Regents Park was opened to the public in 1835 and Birkenhead Park would become the first to allow free entry in 1845.  This was important as more and more people were moving from the country to the towns and cities which were polluted and crowded.  Thinking at the time was promoting the value of gardens in terms of health, they were said to bring you closer to god and were cures for depression, drunkenness, ambition and political agitation.  This was a time when social responsibility for those lesser than you was important and providing parks was one way of doing this.  The parks also allowed for education about species and gave the general public chance to view rare and unusual species.

It was also during the 1800s that the first popular gardening magazine took off and kew gardens was given to the public. 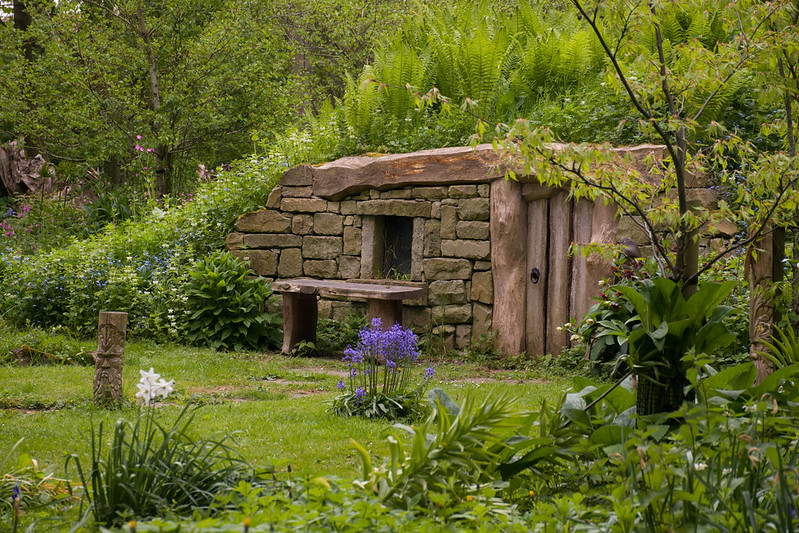 The two world wars were to have an enormous impact on gardening.  The army took over estates and damaged and neglected the gardens of the rich.  And the lower classes were given access to allotments and encouraged to grow fruit and veg as well as medicinal plants.  This was a time when we were heavily dependant on Germany for medicines and so traditional knowledge about healing became very important.  We were also heavily dependent on imports for food which is why the sudden urgency in growing food arose.

Soldiers who returned from war found refuge in gardening and between the wars, gardening was for pleasure as well as an escape from the office and the city streets.  In line with this, the first gardening programme appeared on the radio in 1923.

By the second world war, we had Dig for Victory but alongside this, many saw the importance of flowers to add cheerfulness and colour to the dark times.

Following the war, the rebuilding of towns provided an opportunity and houses were built with gardens.  As people were now starting to own their own homes, it gave them more incentive to tend to their garden, they could personalise it and it provided private space to retreat to.  At the beginning of the 20th century, less than half of the people had gardens but by the end of the century, most people did.  This was due in part to increased incomes and increased leisure times as well as labour saving devices such as the the flymo lawnmower which came out in the 1960s.

Garden centres landed and TV became more popular, showing gardening as a hobby and teaching people and inspiring them.  Which brings us to today and the increasing popularity of growing your own veg and herbs and choosing to buy organic or locally grown produce. 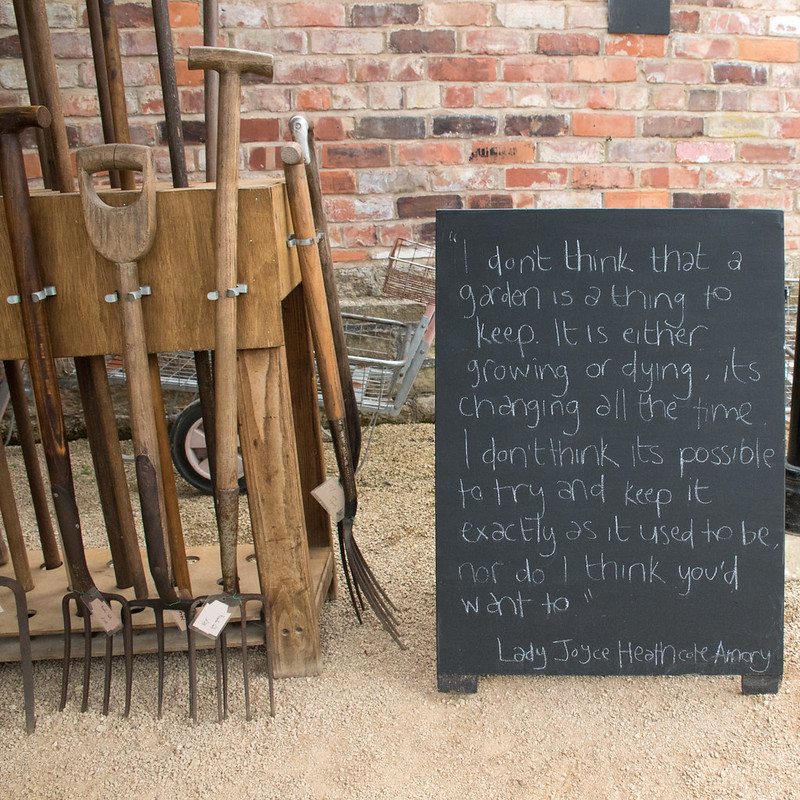