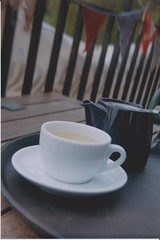 Apparently tea is the second most popular drink in the world, next to water.  It’s been drunk for about 5000 years but didn’t reach England until the 17th century.

According to legend, tea was first discovered by the legendary Chinese emperor and herbalist, Shennong, in 2737 BCE. It is said that the emperor liked his drinking water boiled before he drank it so it would be clean, so that is what his servants did. One day, on a trip to a distant region, he and his army stopped to rest. A servant began boiling water for him to drink, and a dead leaf from the wild tea bush fell into the water. It turned a brownish color, but it was unnoticed and presented to the emperor anyway. The emperor drank it and found it very refreshing, and cha (tea) came into being.
– Wikipedia

Tea was traditionally used as a medicinal drink which had diuretic properties, antitoxins and works as a mild disinfectant.  It was also used to calm the mind for meditation.  It wasn’t until about the 15th century that tea began to be valued as a drink itself rather than purely for it’s healing properties.

During the 16th century, tea was introduced to Portuguese in China who went on to  import it for their aristocracy.  One fan of the drink, Catherine of Braganza, would marry the English king Charles II in 1662 and bring with her the drink she was so fond of.  Whilst she didn’t introduce tea to England, it is likely in part down to her that it became so popular.

In the early 17th century, a ship of the Dutch East India Company brought the first green tea leaves to Amsterdam and the first advert for tea in England was published in 1658.

Tea was expensive in England and was therefore for the upper classes, not the everyday person.  One reason for the price was high taxation which inevitably led to smuggling of tea and adulteration of the leaves.  By 1784, taxes on tea would fall from 119% to a much more reasonable 12.5%.

Perhaps because tea was now available to the masses, debates began about the health impacts of it.  In particular, there was concern that it would lead the working classes to weakness and melancholy, which obviously wouldn’t be very good for those of higher status who relied upon them to do their work.  A counter argument, encouraging the working class to drink tea, came from the temperance movement who saw that tea could be an alternative to alcohol.

But the world of tea drinking is not as civilised as one might think.  On the night of December 16, 1773, 342 chests of tea were thrown overboard in Boston harbour. This symbolic act was a protest against the taxation coming from Britain. Colonies were only allowed to purchase British tea which was taxed, with taxes benefiting Britain, not the colonies.  This was part of a conflict which would lead to the American Revolution.

Back in England, tea continued to grow in popularity and unlike the tea drinkers of China, the British were adding sugar, a product we obtained as part of the slave trade.  By the 1720s, exchanging silver for tea was a significant trade but to generate this silver, Britain began exporting opium from British colonies (present day Pakistan and Afghanistan) to China.  Opium had been used in China for many years but during the 18th century, with British imports, usage increased fivefold.  This caused many social and economic problems and steps were taken by the Chinese to reduce imports of opium in the late 1830s.  This would cause major issues for British importers of tea and was one of the factors in the first opium war.

Sensing an impending tea crisis, and an opportunity, work already underway into finding alternative ways of sourcing tea.  Tea plants and Chinese workers were smuggled out of China and put to work in India.  By 1839, tea of marketable quality was available from India.  In 1858 the British government took control of India and by 1888 tea imports from India exceeded those from China.

Moving forward in time, during the first world war, the British government took over importation of tea to ensure that tea would continue to be available at an affordable price because of it’s morale boosting qualities.  During and following the second world war, tea was rationed.  And by the 1970s the teabag had taken off in Britain.  The tea bag was actually designed in America in the early 20th century but took a while to become popular.

As well as war and taxes, the popularity of tea drinking also led to the creation of faster boats.  This was to help companies get tea from China to England quicker and hence they could charge more as they would have a temporary monopoly over sales.  The fast ships were ideally suited to low-volume, high-profit goods, such as tea and opium and their use would peak in the 1840s as a result of demand for tea.

We also see the worldwide cultural importance of tea reflected in the tea ceremonies and rituals, in tea houses and in art and literature.  And it Britain, it is intrinsically woven into our way of life that it is hard to imagine Britain without tea.