This month, looking at plants, is nearly at a close but before we head into December, I thought it would be timely to consider plants and Christmas.  I’m not especially into Christmas but there is a lot of tradition surrounding it which can be interesting.  Also, I’ve not yet looked at holly or ivy in my plant spirit posts and was already planning to, so this will kill two plants with one blog post as it were.

According to the telegraph, the song relates to ancient fertility mythology and the association of the male with holly and good and the female with ivy and evil.

Holly is a broad leaved, evergreen which is found in most of Europe.  In Britain, it tends to grow as an understory beneath oaks.

Holly is well known for it’s spines which are obviously there to deter predators, and less sharp leaves can be found higher up the plant.  For those intrepid herbivores who still take a bite, the leaves contain bitter tasting alkaloids.

It is a slow growing plant which can live for 250-300 years which has become iconic at Christmas time.  It’s wavy edged leaves and prickly spines, glossy and rich green take a long time to decay.  This may be one aspect of the holly’s nature which has contributed to it’s association with eternal life, with it’s evergreen demeanour being another.  In the midst of winter, when all is dark and cold, the holly continues to rule with dignity, facing the challenging weather head on.

Holly is considered masculine to the ivy which is feminine, possibly because the holly is spiky and defensive where the ivy is more graceful?  Interestingly, the nature of the holly brought into the house is supposed to determine or predict whether the house will be ruled by man or woman in the coming year.  The smooth edged type signalling a woman’s rule. Another tradition says the same but for holly and ivy, with the plant first brought into the house marking the future year.

Holly was planted near homes as it was said to protect against lightning strikes.  As with the oak, it is said to be associated with thunder and hence Thor.  Bringing twigs into the house wards off evil spirits, which I imagine are particularly active in the dark nights of winter.  Another seasonal link is found with the holly king who rules the year from mid summer to mid winter, when the oak king takes over.

Whilst the tradition of bringing holly into the house goes back much further, Christianity has appropriated it as a representation of Jesus.  Holly is said to be representative of his crown of thorns, the red berries his blood and the white flowers a reminder of purity and his virgin birth.

Ivy is another evergreen plant and also represents eternity.  It can grow in difficult environments and climbs upwards, using other plants, to reach the sunlight.  Given enough time, they can also bind together other plants which has been taken to mean it is symbolic of unions, whether friendships or more.  It can also mean fidelity and peace (as it brings together different plants). 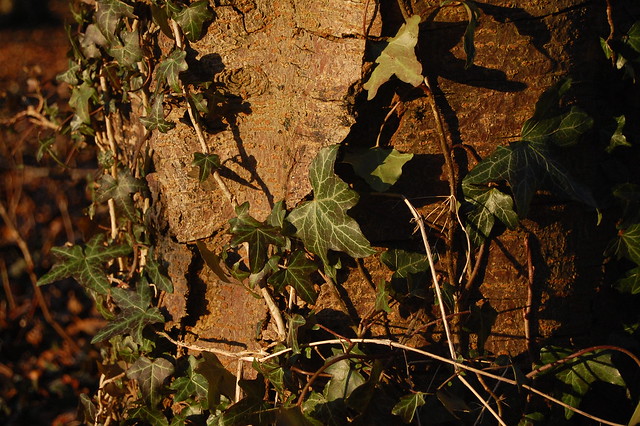 As we’ve just seen, ivy is considered feminine and apparently in Ancient Greek mythology, there was a dancing girl who danced herself to death, dying at the feet of Dionysus.  He was moved by her dancing and transformed her into the ivy plant.  Moving to Rome, ivy is said to be linked to the god of wine, Bacchus, Dionysus’ counterpart.  I wonder if this is in part due to the way ivy grows in a similar way to grape vines?  Don’t try eating ivy berries though… they’re poisonous.

On Owlcation, Edith Rickert, who researched carols from 1400-1700, is referenced as noting that many holly and ivy carols existed during this time period and often involved a debate about the relative merits of men and women.

From a Christian perspective, Ivy, with it’s need to use other plants for support, is said to be a reminder that we need to cling to god for support…

If you’ve read some of my animal spirit posts, you’ll have realised that virtually everything is a symbol for an aspect of Christianity.  Hence my cynical tone here is not about the religion, it’s about the shoehorning of symbolism.

And a tiny note about mistletoe

Mistletoe was thought to protect from evil and was also associated with fertility.  Whilst we use it today for Christmas, it was thought to be bad luck to bring it into the house before New Years Eve.  On a basic level, this makes more sense for the current practice of kissing under mistletoe, surely you want a new relationship to start as the year starts not as it dies?

It was used in homes to protect from lightening and evil but because it is associated with paganism, it’s said to be banned from churches*, except York Minster.  Here, it is laid on the high altar on Christmas Eve.  Then a proclamation was made which pardoned and granted freedom to “inferior and wicked people”.

One thought on “The holly and the ivy”