“Our mentioning of the weather – our perfunctory observations on what kind of a day it is, are perhaps not idle.  Perhaps we have a deep and legitimate need to know in our entire being what the day is like, to see it and feel it, to know how the sky is grey, paler in the south, with patches of blue in the southwest… I have a real need to know these things because I am part of the weather and part of the climate and part of the place, and a day in which I have not shared truly in all this is no day at all”
– Thomas Merton

Before the 1860s we didn’t have weather forecasts as we know them.  There wasn’t really a science of weather. Meteorology was a study of meteors, but that used to mean any event that happened in the space between earth and moon.  In 1755, Dr Johnson defined meteors as “any bodies in the air of sky that are of a flux and transitory nature”.  A definition which could well include shooting stars as well as clouds, flashes of lightening or even clouds.

When one MP suggested to the Commons in 1854 that it might be soon possible to know the weather in London twenty-four hours in advance, the house roared with laughter.
– The weather experiment by Peter Moore

The lack of scientific understanding did not, of course, stop people from trying to predict the weather, it just meant they used very different ways to the way we do it today.

Understandings of how weather was created included it being a sign from god, a message, and thus, if one could communication with god, one might be able to make certain educated guesses about the weather.  How you perceive weather, how you think about it’s creation, will certainly affect how you approach attempts to predict it.

In around 340 BC, Aristotle said that the sky was filled with two distinct ‘exhalations’.  One was hot and dry and produced shooting stars.  The other was cool and wet and clung to the ground as clouds, dew and rain.  Within this system, he explained winds as hot, dry rivers of air.  Thunder was either the sudden escape of a hot exhalation caught in the condensation of a cloud or the violent collision of wind and cloud.  It would take until the 17th century for his ideas to be dismissed. 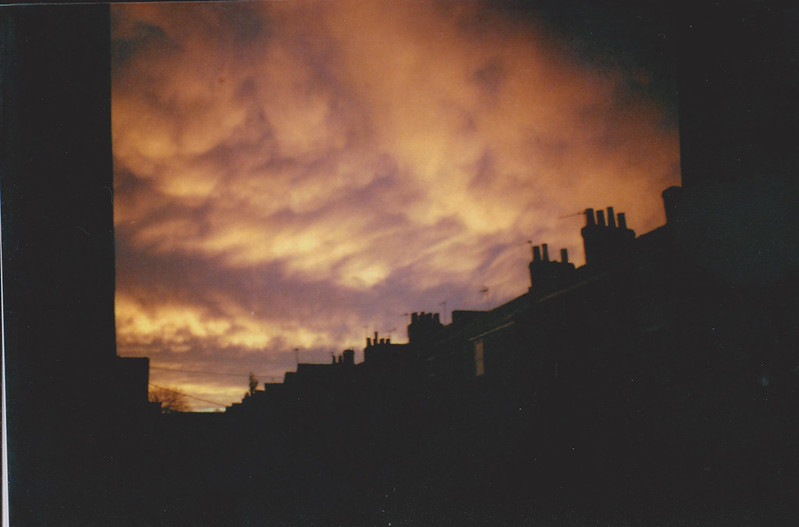 In a lot of traditional weather forecasting, experience, observation and shared knowledge form the basis.  This accumulation of information and patterns produced weather lore; the rhymes and sayings which make predictions.  There are many many of these and they vary regionally and they also vary in how helpful they are.  Here are a few from Yorkshire and England:

You can find out more about weather lore accuracy from the met office.

Weather lore often uses the appearance of the sky, which makes a lot of sense given that’s where weather happens!  But even basic predictions such as a clear sky leading to a frosty morning can be helpful to us today, reminding us to cover our plants or our cars.  Thickening cloud cover can indicate rain, halos round the moon (caused by cirrostratus clouds) can indicate rain.  Thunderstorms can mark the approach of a cold front and morning fog means a fairly good day because the approaching wind would have blown it away if it was blowing in new weather.

Other weather lore turns to humidity levels to make predictions, such as the Native American weather stick. Seaweed and pine cones were also used to predict rain because the humidity changes their appearances.

When windows won’t open, and the salt clogs the shaker,
The weather will favour the umbrella maker!