Despite possibly being the most famous pigeon in the world, shockingly many people have never heard of Martha, or even of her species – the passenger pigeon. Shocking because, whilst like the dodo the species is extinct, they were quite possibly the commonest bird in the world and have only been extinct for 100 or so years. The dodo on the other hand died out long ago and as far as we know never reached great numbers. This post, in part, is a gesture towards balancing that inequality.

Martha was the last of her species, dying on 1st September 1914 in Cincinnati Zoo. The last wild passenger pigeon had probably died several years earlier, with the last reliable recording of one being in 1900.

In May 1850, a 20-year-old Potawatomi tribal leader named Simon Pokagon was camping at the headwaters of Michigan’s Manistee River during trapping season when a far-off gurgling sound startled him. It seemed as if “an army of horses laden with sleigh bells was advancing through the deep forests towards me,” he later wrote. “As I listened more intently, I concluded that instead of the tramping of horses it was distant thunder; and yet the morning was clear, calm, and beautiful.” The mysterious sound came “nearer and nearer,” until Pokagon deduced its source: “While I gazed in wonder and astonishment, I beheld moving toward me in an unbroken front millions of pigeons, the first I had seen that season.”
– Audubon

Martha’s death is made more poignant by the fact that just decades earlier, her species had flown in flocks so vast, so abundant, that they darkened the skies. We’re talking millions of birds here, with some of the largest colonies estimated to include 100 million birds.

These numbers are hard to imagine, but in the UK today there are an estimated 168 million birds. For the passenger pigeon, that would be about two colonies.  Indeed, it’s estimated that the global human population exceeded the population of the passenger pigeon as late as 1850. Before then there were more of these birds than people on the planet. To go from that to extinction in just over 50 years is mindboggling.

So, what were passenger pigeons like? Well, the males were grey-blue with bright orange throats and chests whilst the females had duller colouring. Both were powerful birds, streamlined and built for speed. Their scientific name means wandering migrant and gives us some insight into their way of life. They ate acorns, beech nuts and chestnuts and would travel in vast flocks across America to find food. Having located a feeding ground, their sheer numbers would mean it would be wiped clean incredibly quickly. And their diet would extend to crops, resulting in a bad reputation.

They would also nest and breed in these massive flocks, causing incredible damage to forests and surrounding areas. The floor would be covered in several inches of dung, grasses and other young plant life would be destroyed and the impact would be felt for several years. John James Audubon described it “as if the forest had been swept by a tornado. Everything proved to be that the number of birds resorting to this part of the forest must be immense beyond conception.”

By some accounts, individual trees held 500 nests and even if this is an overestimate, at two adults per nest and one baby (it’s thought they had one egg per couple), this still mounts up to a lot of birds per tree. It’s not wonder than branches snapped and trees fell.

The story of their demise is, necessarily, not a happy one. Mark Avery provides us with some context in his book A Message From Martha:

World War 1 saw the deaths of 16 million military souls in its four years – four million combatants each year. In comparison, the war against the passenger pigeon must have despatched at least two billion birds in a century, which is a death rate of 20 million pigeons a year for a century – a death rate five times as high over a period 25 times as long.

But how did this excessively abundant bird go from so many to so few in such a short space of time? Well, European invasion will have been a factor… Suddenly America was home to a lot more humans who therefore needed a lot more food and were taking up a lot more land… But I don’t know enough about American history to go into that.

The passenger pigeon had been a source of food for people in North America for a long time. They also had some religious and ritual significance to some indigenous people. Native Americans would leave the adults undisturbed, killing instead the young and hence allowing for some sustainability within the species.

As well as a source of food, in the 18th and 19th centuries, it was believed that parts of the passenger pigeon had uses in healing. The blood for eye problems, dung for headaches etc and the feathers were used in bedding.

In the 19th century, commercial hunters got involved, using both guns and nets to kill them and then sold them on as food, for humans and for animals. Because of how easy it was to kill passenger pigeons, many people didn’t consider it to be a game bird.

Essentially, you’d wait until the flock was overhead and then just fire randomly. Professional shooters could easily kill over 50, having fired a gun once. Nets that were used could catch hundreds of adults at once. 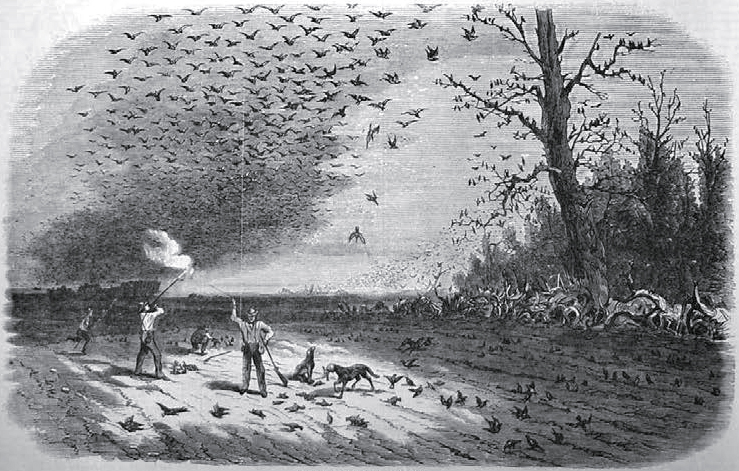 It was so easy to kill passenger pigeons in this way that when competitions were held, the winner would be looking at having killed tens of thousands in one competition. As rail networks cropped up, recreational hunters were transported in for fun days out…

By the 1870s, there had been a noticeable decrease in the passenger pigeon population and the last large scale nesting was in 1878 where 50,000 birds were killed each day for nearly five months. After this, scattered nest sites were reported but cautious parent birds were abandoning their nests if they felt threatened. This meant that not only were there dramatically fewer adult birds, but the birds which were alive weren’t reproducing as successfully as in the past.

Whilst the scale of hunting clearly contributed to the extinction of the passenger pigeon, other factors were also at play. This was a time of industrialisation and changes in human lifestyle. Deforestation was common arising from the need for more farming land as well as demand for the wood to be used as fuel and as a building material. Old trees were of particular importance to the passenger pigeon as these were the ones which provided food. And as they needed to be in a forest so that they could accommodate the large flock of birds it’s easy to see how changes in land management could have had a huge impact on the species.

The disappearance of the passenger pigeon from the wild would inevitably leave huge changes in the ecosystem. Before, when the species had nested in forests, the dung they had left behind had increased the frequency and intensity of forest fires, something which can refresh an environment and allows certain species chance to grow. The dung had also destroyed new growth and small, vulnerable plant life in these forests. Without the dung, the flora of these areas would inevitably alter. As a major consumer of acorns, chestnuts and beechnuts, the passenger pigeon made it hard for other species who relied on these food sources. In particular, the acorn eating white footed mouse saw it’s population bloom following the extinction of the passenger pigeon as there was less competition for food. These mice are hosts for ticks and some people have blamed their population boom for the increase in lyme disease.

Perhaps one of the greatest lessons we can take from the demise of the passenger pigeon is that abundance does not always mean security.

“The passenger pigeon needs no protection. Wonderfully prolific, having the vast forests of the north as it’s breeding grounds, travelling hundreds of miles in search of food, it is here today and elsewhere tomorrow, and no ordinary destruction can lessen them, or be missed from the myriads that are yearly produced.”
– Ohio State Senate, select committee, 1857