This is another massive area that I originally intended to cover in just one blog post, especially given that I’ve already written a lot about birds and folklore in my animal spirit posts.  But that, it turns out, was never going to happen.  Instead, I wish to explore first why birds have captured the imagination and then look at mythology, folklore and beliefs around birds and dead, birds and life, birds as messengers and migration.  Even then I am only scratching the surface, looking at a few of the themes that have cropped up again and again in my reading and research.

The motifs I’ll be looking at are ones which I’ve found again and again and which cross cultures as well as time.  These are ideas that have permeated the human consciousness and which we see repeated in art, poetry, storytelling, mythology, religion and superstitions.

It has been suggested that the reason we are captivated and entranced by birds, and why we use them in our culture, is because they are so similar and yte so different to us.  Additionally, their ability to conquer the world, to live in so many different climates and habitats, means that people the world over are familiar with avian life.  We life alongside birds, making them everyday, but we also get glimpses into exotic, foreign and very different bird species.  Again this marks birds out as both everyday and as magical.  Birds parallel our own species, yet they also elevate it and make it mysterious, what more do you want for a metaphorical playground for human life?

We’ve already seen that in old norse tradition the language of birds is an important feature in literature and mythology and this theme is echoed across the world.  It appears in greek mythology, in alchemical literature, in religions and in folk tales from Wales to Russia.

Other cross cultural themes include the association of birds with life and with death, birds as messengers, birds as omens and the concept of migration.  It is these that I’ll be considering but there are many others and it’s a really interesting area to delve into.

Let us start with the ultimate creation of life; birds and eggs occupy a significant place in creation myths.  I am not going to repeat all the different creation stories here but there are a few common themes; the world or universe coming from an egg, birds being part of creation and birds as bringers of fire (whilst not actually part of the creation of life it is an important part of human development).

We have the cosmic egg, the golden egg and the black egg, all of which I’ve written about before if you’re interested.  The general gist here is that something hatched from the eggs, whether it was the universe itself or a god who then went on to create the universe.

Eggs also feature in tales which explain the creation of the sun and the moon.  For example in aboriginal Australia, the egg of an emu was thrown into the sky and it’s yolk lit a fire that illuminated the world below and hence we have the sun.

There is also a lovely Finnish myth about creation.  The goddess of air let a bird lay an egg on her knee but it fell and as it did so it formed the universe.  The white of the egg created the moon and the yolk the sun.

I mentioned birds as bringers of fire and this is often part of a story which explains why black birds are the colour they are.  In many tales from many parts of the world, there was no fire on the land but the creatures knew that fire existed.  Sometimes fire was on an island, unreachable by all but the birds.  And attempts were made to retrieve the fire, often by ravens, crows and blackbirds.  Whilst they often succeeded, they would be scorched by the fire they carried and would forever bear the mark of that event.  Other stories explain the black feathers as punishment for some misdeed but I like the fire finding one better.

Eggs are also symbols of fertility and the creation of individual lives as well as the creation of the entire universe.  We see this clearly in the use of eggs around easter time but it is not surprising when you think about it.  How amazing is it that life, actual living beings, appear seemingly miraculously out of these fragile shells? 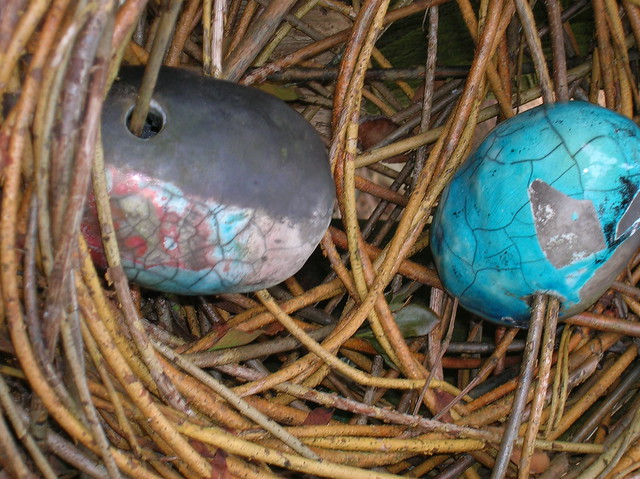 Eggs aren’t just a symbol of life in Christianity, they have been used for thousands of years to signify new growth, new life and fertility.  Ancient Greeks and Romans left eggs with their dead as a sign of life after death.  In France, brides used to break an egg as they entered their new home to ensure their fertility.

A number of cultures contain the idea of soul birds, the idea that when you are born a bird brings your soul to your body.  Conversely, when you die, a bird takes it back.  In some stories the birds absorb the soul; if you die at sea, storm petrels and sea gulls house your soul and if you die on land it would be ravens and crows.  In other stories the birds are carriers of the soul, taking it from the body to the afterlife.  An ancient Chinese tradition was that storks would carry souls to heaven which ties in nicely with our beliefs about storks bringing babies.

Where there is life, there tends to be death.  And this is certainly the case when it comes to birds and folklore.  Birds are regularly considered as omens of death and are found in rituals of death, for example in Judaism it is traditional to eat eggs after a funeral to signify loss and the circle of life.  As we’ve just seen, birds can contain or carry the souls of the dead but there are also stories of them stealing souls…

A more positive belief is that gulls are seafarers reincarnated, puffins are monks and certain types of birds are the reincarnation of children who died young.  The Sumerians believed that the dead existed as birds in the afterlife and other beliefs say that dead souls remain as birds until judgement day.

When it comes to birds predicting death, the superstitions are numerous and whilst the birds vary, there are similar beliefs across many cultures.  Certain birds on or near the house are bad omens with black or nocturnal birds particularly vilified.  Birds calling at night, especially those which don’t normally, are either bringers of death or a sign of death.

A rather sinister belief about ravens says that because they have a good sense of smell, they can smell out dying bodies and in the hope of preying on them they hang around on chimneys or try and get into the sick room…

Seeing three swans together or rooks deserting a rookery are just two more beliefs that use birds to predict death. Birds as omens is something I’ll be looking at in part two of birds and folklore.

There is so much to say just on the topic of birds, life and death that it’s only fair I include some links to further reading if you’re interested:

Books which aren’t specific to life and death and I’ve already mentioned them but they are worth repeating: