“There is, one knows not what sweet mystery about this sea, whose gently awful stirrings seem to speak of some hidden soul beneath.”
– Herman Melville

At one point it was thought that there was nothing in the deep sea, that it was desert like. In keeping with the Christian tradition of heaven above and hell below, many cultures have turned their eyes to the skies, preferring it to what lives below.

In the preface to the 1961 edition of The Sea Around Us, Rachel Carson writes:

“Even a decade or so ago it was the fashion to speak of the abyss as a place of eternal calm, its black recesses undisturbed by any movement of water more active than a slowly creeping current, a place isolated from the surface.”

Beneath the surface there are multitudes of habitats, providing homes to many different species and allowing nature to showcase her many different adaptive strategies for survival. 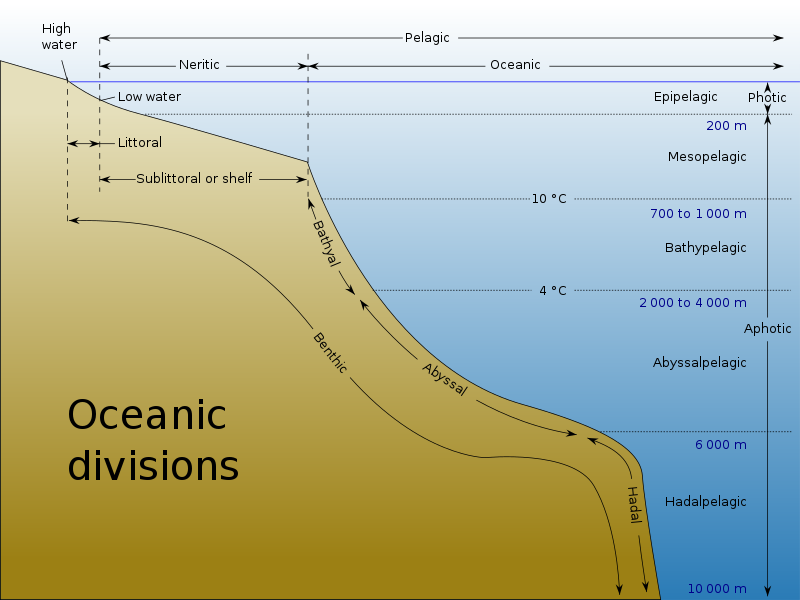 Epipelagic Zone, or The Sunlight Zone

From the surface down to around 200m.

This is the part of the ocean where there is enough light for photosynthesis to occur. Because of this, around 90% of ocean life can be found in this zone including plankton, seaweed, jellyfish, sharks and dolphins.

Mesopelagic Zone, or The Twilight Zone

Only very faint light penetrates to this depth and many creatures have huge eyes to optimise what little light there is. It is here that we start to see sparks and flashes of luminescent creatures. Some species from this zone rise up towards the surface at night to feed. Because there is not enough light for photosynthesis there is no algae here, instead we find creatures such as wolf eels, squid and cuttlefish.

The twilight zone is also home to the bristlemouth, Earth’s most abundant vertebrate, numbering in the hundreds of trillions to quadrillions.

Bathypelagic Zone, or The Midnight Zone

Now we enter into a world without sunlight, the only light here is that made by the animals themselves. Water pressure becomes intense which has limited our investigations and also limits what species can survive here. Despite that, we find squid, octopuses, anglerfish and even sperm whales who are diving down in search of squid to eat. As well as by eating each other, sea creatures survive by consuming detritus from above, known as marine snow.

To cope with the lack of light and high pressure, as well as limited food, animals in this part of the ocean have adapted to become very energy efficient. Adaptations also include small eyes, transparent skin and, because predators can’t see them, they don’t need powerful muscles to attack or escape from danger.

To put our exploration of the ocean into context, you only have to go an average of 3km down and half the species you see will be unknown to science. This means that from the midnight zone down, we know very little about life.

Abyssopelagic Zone, or The Abyss

From around 4,000m down to above the ocean floor.

The name abyss means bottomless and comes from a time when it was believed the ocean to be bottomless. This is a barren zone with very few creatures choosing to battle the dark, the pressure and the cold. Those that do include squid, giant tubeworms and sea spiders.

Whilst the conditions down here are generally incredibly difficult for life, there are some areas which contain hydrothermal vents. They emit sulphur which allows microbes to life which in turn creates food for other organisms. Around these vents, we find snails, shrimp, crabs, fish and a species of tube worm which can grow to over 2m tall despite having no mouth or digestive tract. This ecosystem is perhaps the only one to exist which doesn’t rely on the sun, instead using chemosythesis instead of photosynthesis.

Hadalpelagic Zone, or The Trenches

From around 6,000m to the deepest, darkest depths of the ocean.

Named after Hades, the Greek underworld, the Hadal Zone is made up of deep water trenches and canyons. A dark and dangerous world of extreme pressure and almost freezing waters (1 tonne per square cm and 1 degree c) yet creatures are thriving down there in hydrothermal vents.

The deepest known part of the ocean, the Mariana Trench, reaches a maximum-known depth of 10,994 metres. For comparison: if Mount Everest were dropped into the trench at this point, its peak would still be over 1.6 kilometres (1 mi) underwater.

We see and know significantly more of the moon that we do of the deep.