Oh my gosh, jellyfish are amazing!  Even if this card hadn’t been in the deck, I’d be writing about jellyfish as part of my sea month (which, by the way, may last more than a month as I’ve barely touched on sea and writing yet!). 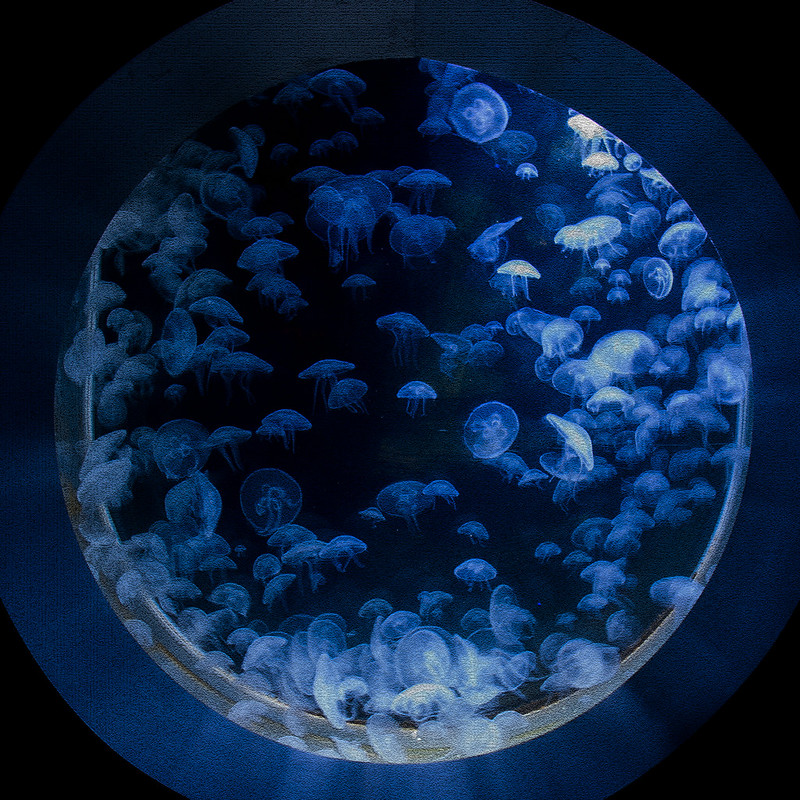 The jellyfish also ties into our sea monsters theme as many people are, understandably, scared of jellyfish.  However I’m not going to look too much at the legends and myths, instead I’m going to be looking at the metaphor of the jellyfish and what wisdom it may have to share with us.

The biology of the jellyfish

Jellyfish have been around since before the dinosaurs, and could well still be around when humans have died out.  Having inhabited the ocean for over ½ billion years, they are a highly successful species and have adapted to many world changes in that time.

There are over 1000 types of jellyfish ranging from the size of a grain of sand to longer than a blue whale.  They all consist of a translucent bell which contracts to propel them through the water and have long, trawling, trailing tentacles which they use to capture prey.  Whilst they come in different colours and patterns, they are all transparent which makes it easier for them to blend in and avoid predators.

This transparency provokes some interesting thoughts when we think metaphorically about the jellyfish and ourselves.  With the jelly, what you see is what you get, there is no disguising feelings, no saying one thing and meaning another.  What about you?  Are you letting others see you, see your truth or are you, consciously or unconsciously, deceiving people or misleading them?  What about the people around you?  For me, this idea of being able to put yourself out there, heart and soul, brings into question validation.  If I put myself out there, will my emotions be validated or will they be ignored or rejected?  Where can I be more transparent?  Am I validating other people’s emotions or am I accidentally steamrolling over them.  And this comes to play in the self to self relationship as well, am I validating myself, am I honouring the part of me that needs to be seen?

Almost formless animals, jellyfish are alien to us, and they ask us how, without a head, a heart or a brain, can we relate to or empathise with them.  They challenge us emotionally, asking us to step far outside our own existence and our own bodies to understand their life experience and perspective.  How do we understand others?  How do we get to know what they have been through?

As well as lacking head and heart, they also lack a respiratory system, instead their skin is thin enough that they ‘breathe’ through diffusion.  Structurally speaking, they are very simple creatures.  But despite this, they are helping us make breakthroughs in genetic diseases, cancers and research into ageing.  Another species glows green when agitated and the chemical involved has been used as a genetic marker, allowing scientists to track cancer cells.

Interestingly for me, there is collagen inside the jellyfish.  Collagen makes up about a third of our bodies and mine is faulty, causing me pain and other issues.  Extracts of pure collagen from the jelly can have medical applications (but ignore the junk science, drinking collagen will not correct my genetic condition) including in cataracts surgery and for rheumatoid arthritis.

They remind us not to overlook simplicity, for with simplicity can come elegance as well as efficiency.  There are merits to simplifying ourselves and our lives, to going back to basics and stripping back the clutter that we have.

The lifecycle of jellies is fascinating!  Especially that of the immortal jellyfish.

The Turritopsis Dohrmi, or the immortal jellyfish, is an incredible creature.  Like all jellies it starts life as a fertilised egg, turns into larva which then attaches itself to the sea floor and becomes a polyp.  The polyp then buds and these buds break free from the polyp as ephyra – baby jellyfish.  The polyp continues releasing ephyra clones.  The ephyra grow until they are adult jellyfish, also called medusas.  Once the medusa releases eggs or sperm, it dies.

Life is not always linear, sometimes we move forwards and sometimes we move backwards and this is ok.  Sometimes we need to revert back to our childhood, to heal wounds, to have fun or to change our perspective in life.  Consider the jellyfish a chance to reflect on how you allow play and childfullness into your life, how you treat your inner child and where you might need to nurture or mother yourself.

I’m going to be really short and sweet here as I want to get onto their sting, but ponder how the jellyfish move.  They are sensitive to the water around them and they let nature guide their journey.  They don’t fight the current, instead trusting they will get where they need to be.  That said, they can propel themselves along so they aren’t hapless victims of fate.  They are going with the flow, but not entirely directionless.

One of the key interactions between jellies and humans is when they sting us.  Their tentacles are covered in specialised cells which can release venom into the victim.  Not all jellyfish have venom that affects humans but some can kill us.  Even beached and dying jellies can still sting when touched.

Obviously their sting is more aimed at prey and at predators trying to attack the jelly but because of their long, dangling, training tentacles, we can be stung as we brush past them in the sea.  And as jellyfish are transparent and can be incredibly tiny, we can’t always see the threat.  The same is true of other threats in life, perhaps the jelly is nudging you to open your eyes a bit more.  Perhaps you need to face that threat which you’re currently pretending doesn’t exist.  Ignoring it doesn’t mean it’ll go away.

The other idea that comes to mind with the jellyfish’s sting is around self defence.  That, and to catch food, is why they have the venom.  I’m not advocating that you go around injecting people with toxins but think about how you can set up boundaries etc to look after yourself.

Are you lashing out?  Are you causing others, or yourself, accidental or avoidable pain? 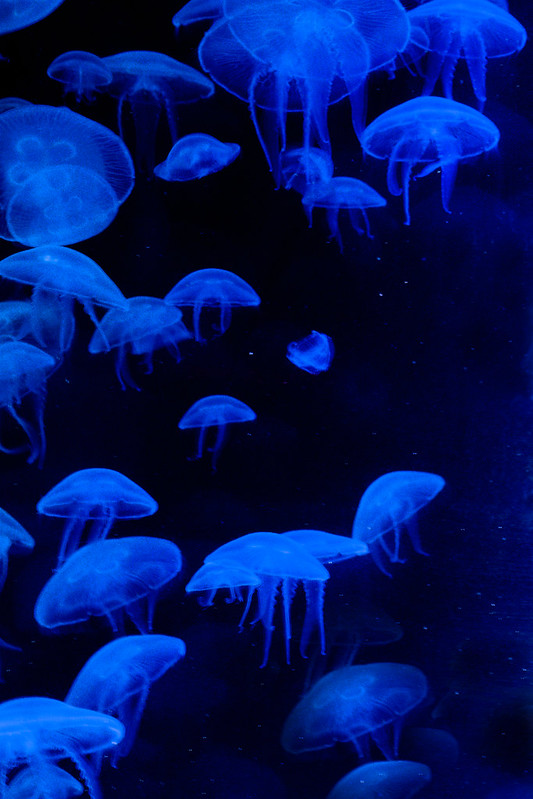 I was learning about jellyfish when I was in hospital and at some stages I was on some strong medication that made me a bit spacey.  When I was looking back over my notes I saw what was probably the result of one of these occasions.  There, in my scrawl, is the question:

What do jellyfish dream of?

Answers on a postcard please!

One thought on “Animal Allies: Jellyfish”