Whilst many people would have turned to the Amazon as an example of a river giant, I’m headed east to another great river, the Mekong.  A river I have seen, crossed over, floated on.  From a boat on the Mekong, I spotted Irrawaddy river dolphins.  From an island in the river, I talked agriculture with a tuk tuk driver.  I slept in rooms looking out at the Mekong.  I have a connection to it which I do not have with any of the other massive rivers.

The Mekong, like the Amazon, is an incredibly important river in terms of wildlife, economy and livelihoods.  It flows from Tibet to China to Myanmar to Laos to Thailand to Cambodia to Vietnam where it ends in the 9 dragons before entering the South China Sea.  From source to sea it is an estimated 2,703 miles.

Flowing through so many countries, the Mekong binds together a range of cultures and is the life blood of Asia.  It provides food, transport links, irrigation, the river edge provides homes to a vast array of wildlife.

I visited the Mekong when I was in Cambodia and so will be focusing on that stretch of this epic waterway.  Life in this country is focused around the river and the regular floods are important to the economy.  When it floods, the Mekong brings water and nutrients to the rice fields which line the riverbanks.  Rice is the main crop in Cambodia and without the river bursting over to the floodplains, irrigation would be needed and I suspect it would become uneconomical to grow.  Looking at the Mekong delta more widely, we see how crucial the floods are.  A vast amount of rice grown here gets exported and earns the area the nickname the rice bowl of asia.

When I was in Cambodia, we drove over a rickety, slightly terrifying, wooden bridge to reach an island in the Mekong.  This bridge gets rebuilt every year because when the floods come, it gets washed away.  But these same floods are what provides the fertile land for agriculture and grazing. 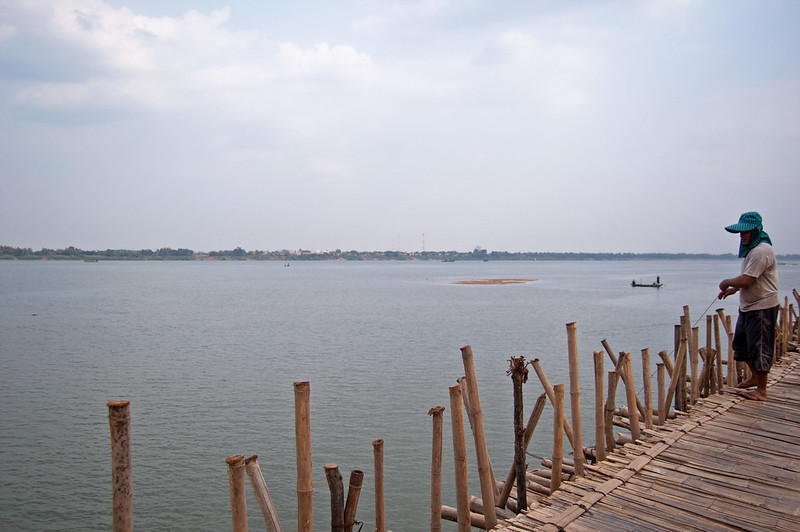 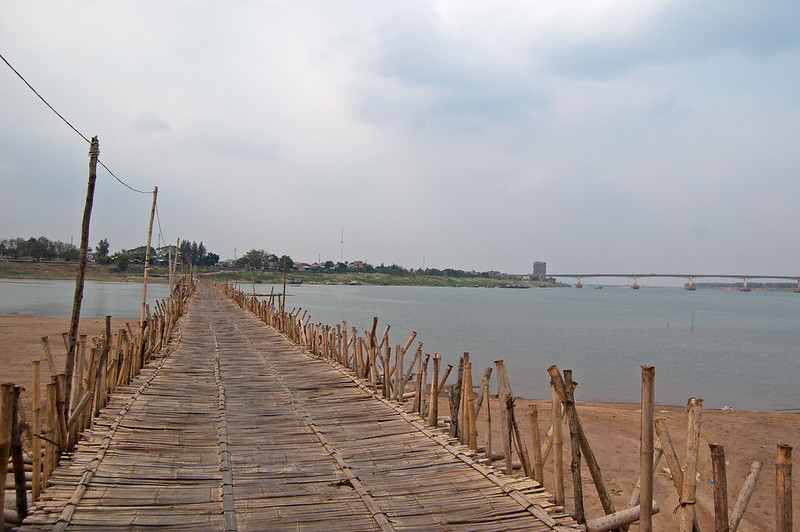 The Mekong is important to food security in another way; the fish. Fish and crustaceans make up over 80% of the protein that Cambodians eat and fishing provides jobs and livelihoods.  And the impact of the river goes beyond her banks.  At Phnom Penh, the Mekong is joined by another river and lake system – the Tonle Sap – and affects the direction of this water system.  When the Mekong is low, the Tonle Sap is a tributary and when the Mekong floods, the flow reverses and the floodwaters head up the Tonle Sap.  This means that a larger area benefits from the gifts of the floods and more people would be affected by changes.

Which brings me to the topic of dams.  Any transboundary river brings with it potential for political difficulties.  In the case of the Mekong, this is played out by the creation of dams in Thailand and China.  The dams themselves are built, for example, to provide hydroelectricity to their people but actions have consequences and in this case, the consequences play out down river.  Out of sight, out of mind, especially if it’s not affecting your country.

As we’ve seen, millions of people depend on the Mekong and her floods and without the fast flowing waters, food security will be threatened, economies will be affected and so will cultures and the environment.

The Mekong is already heavily dammed, with many more dams planned and under construction, and we can’t always predict the impact they will have.  What we do know is that damming the river increases the risk of earthquakes, creates food shortages, and, as is so often the case, those most in need will be hardest hit.

“The very people that regional governments and international organisations are spending a lot of time trying to alleviate from poverty are the ones who are going to be impacted.”
– Ian Baird

As well as the human cost of changing the river, there is the environmental one.  The Mekong basin is one of the richest areas of biodiversity in the world, second only to the Amazon.  As well as the many known species of plants, mammals, birds, reptiles, amphibians and fish, new species are being regularly described.  In 2009. There were 145 newly described species which included 29 fish, 2 birds, 10 reptiles and five mammals.

The river is also home to some very large fish including the giant freshwater stingray which can reach 5m in length and the Mekong giant catfish which can grow to 3m and weigh 300kg.  These large fish populations have, however, declined drastically, in part due to the building of dams.

Another species that is particularly susceptible to the impact caused by dams is the Irrawaddy dolphin.  Some Laotians and Cambodians believe that the Irrawaddy dolphins are reincarnations of their ancestors and there are tales of them rescuing people from drowning and even from attacks by crocodiles.  Despite this reverence for them, there are exceptionally few of them left in the Mekong.  They are shy and elusive, barely breaching the surface to breathe so I didn’t even attempt a photograph of them.  It was an honour and a privilege to see them. In the 1970s there were over a thousand of them but they suffered terribly under Pol Pot’s regime and were virtually wiped out.  Today, threats come from fishing, pollution and population segmentation as well as the impact of damns.  But in conservation areas such as Kratie where I saw the dolphins, ecotourism is being encouraged as an alternative way of making a living to fishing.  Hopefully they will not follow the Yangtzee River Dolphin which went extinct in 2007.

The delta plays home to many other interesting flora and fauna including the, now rare, yellow headed temple turtle.  Smooth coated otters, fishing cats and Siamese crocodiles all live in this rich environment.

Perhaps the most moving animal tale is that of the flying bird, a type of crane standing 6 foot tall with a wingspan just as large, lives in the delta.  They disappeared during the Vietnam war as the delta saw some of the harshest fighting but as peace returned, so did the cranes.  What creatures are we driving away with our war against nature?  Our desperation to control the river?  Who is going to pay the price?