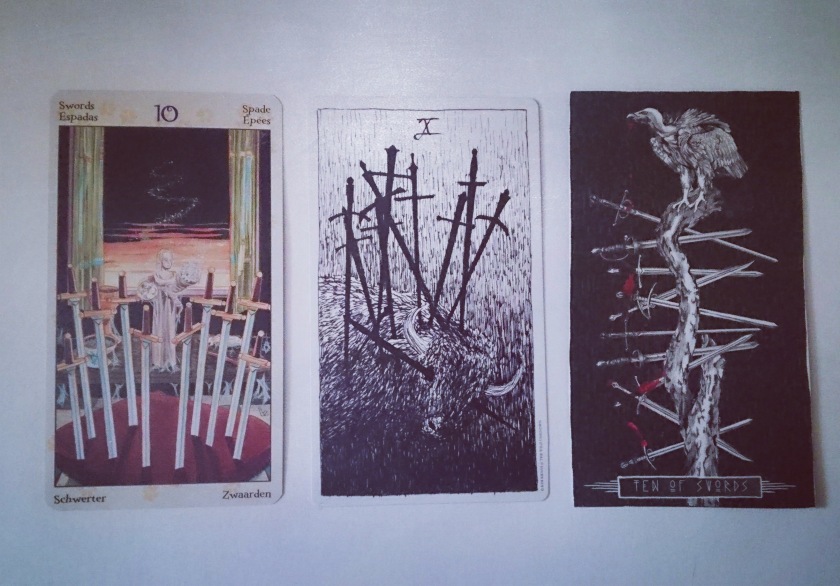 Part one looked at the meanings of swords, tens and considered a few portrayals of the ten of swords.  Today I’ll be looking at a few things associated with the ten of cards, including the symbolism of the buffalo and vulture which we see in the wild unknown and lumina decks. Consider this to be the equivalent of a person’s clothing. They do not dictate or change a person, but instead they are another way they can express their personality and are a way of an outsider seeing inside a person. These aspects are taken secondary to the areas discussed in the previous post but certainly they add depth to our reading and give us more to ponder and to question.

The ten of swords associations

Now I’m going to be looking more widely at who the ten of swords is, using the four cards I’ve already described. Once I’ve done this, I’m going to return to the Wild Unknown and Lumina and see what else we can gleam from them by looking at what the featured animals represent.

Whilst the cards all portray the idea differently, we clearly have a pattern of bleakness, of pain and of devastation in one way or another.

The ten of swords is associated with the sun in gemini and this chimes very nicely with the idea of the play and telling, performing or watching stories. Gemini is the storyteller, the communicator and with this we are given the creative gift to retell or repaint our lives and stories. Where the card itself is bleak and dire, we have the tools to make the light shine. We just have to chose to. We can keep retelling our misery to ourselves, or we can start to tell new stories about who we are and who the world is.

Another way of leaning into this association is that because gemini is a quick sign, has lots of ideas and interests and sees lots of sides to a situation, you can end up overthinking or getting stuck in idea overload unable to make a decision. You can be so busy thinking and learning and perceiving that you can’t concentrate on one thing, your mind and eyes get caught by something interesting over there…

Somewhere along the way I wrote Ephedra in my little white book next to the ten of swords along with a note about how it’s a plant which has defied extinction. I don’t want to go into too much detail about a plant you’ve probably never heard of but…

It’s been around for a very very long time – at least since the early cretaceous period (145 million years ago – 100.5 million years ago) but it nearly went extinct around 66 million years ago (when the dinosaurs were wiped out) but escaped. Based on fossil observations, it’s thought that this group of plants saved themselves by shifting from predominantly insect pollination systems to wind based systems.  The plant shows us the need to keep changing, evolving, adapting and moving forward.

Unrelated interesting, at least to me, Ephedra, as the name suggests, gives us ephedrine, a compound which can be used to treat asthma, narcolepsy and respiratory conditions although ephedra plants have been used to treat illness as far back as 5000BC.  What medicine does the ten of swords gift you?

The Buffalo and the Vulture 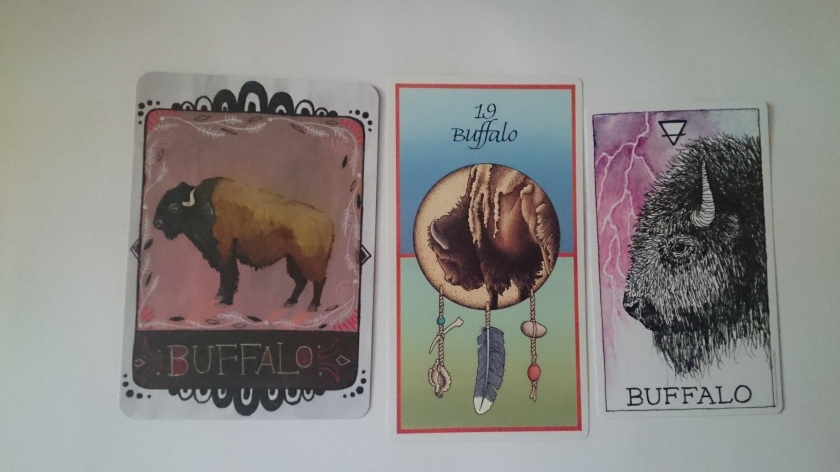 The Wild Unknown Animal Oracle Guidebook tells us that the buffalo is grounded yet heavenly, practical yet spiritual. When this medicine is in balance it is trusting, pure presence. When out of balance it is restless, lacks gratitude.

The buffalo is a symbol of abundance and being grateful for what you are receiving.  They are strong yet gentle, sturdy and grounded but is also spiritual.  Because they provided for the indigenous population of america, they were a way of attaining security.  They used all the parts of the buffalo and thanked them for their gift, because of the generosity of the buffalo they were seen as sacred, sacrificed.  How are we treating those who sacrifice for us?  Are we thankful?  Or do we react by exploiting their offerings?  In the context of the ten of swords, I am wondering if a kind ear has become over used as we recite every hurt we’ve ever received?  There is a time and a place for that and it is a valid way of healing but don’t abuse the generosity of others.  And don’t take without giving.  Share your abundance as well as your pains.

The medicine card buffalo is associated with prayer and abundance, again it is the giving thanks for what we have and what we receive.  Instead of listing our woes, perhaps we list the things that we are grateful for.  Again, I want to stress, this doesn’t mean you can’t feel your hurts or process your worries, but we privileged negativity over positivity and they can co-exist.  Just as the buffalo is both grounded and of the heavens.

“Buffalo… You bring us, the gifts of life. Hear our prayers, smoke rising, like phoenix, we are reborn, within the scared words.”
– Sams and Carson 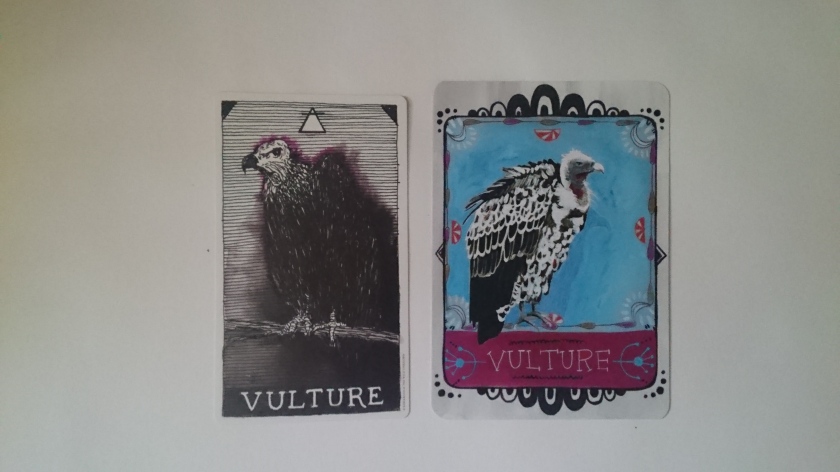 For the vulture, the Wild Unknown Guidebook has the keywords guardian and purifier and notes that it is essential for rebalance. When in balance this medicine clarifies and reveals wisdom. When out of balance, it is dramatic and aggressive.

It can be hard to see why we should like a vulture, but if you look closely enough and give it time, you can find that they are fascinating and vital to our planet. Perhaps when we think of the ten of swords then, we are creating space to find a silver lining. To reach it, you need to work though some dark and heavy preconceptions, complex emotions, an unfounded hatred perhaps but this work that you’re putting in, that is what will make the reward feel so much more powerful. You will gain wisdom if you seek to know the vulture.

Change, like the vulture, has a bad reputation.  But both can be important to cleaning up, to cleansing and purifying the self and the environment.  The vulture cleans up after others and keeps our planet, and us, healthy.

Although the vulture only appears on one of the ten of swords I looked at, it feels appropriate for a sword card.  The belief that they have excellent eyesight means they have been thought to be able to see into the future.  With all the thoughts, imaginations and worries of the swords, this suit can also, if they wish, peer into the future, although they may find themselves dwelling on the past instead…

With the vulture, and the ten of swords, we have a theme of death and rebirth, hitting rock bottom and moving forward.  There is an aspect of renewal to both. However painful and difficult the death is to experience, it will allow something new to come into being.

Linked to the idea of birth, the vulture is associated with mothering and given how tricky the ten of swords can be, this is certainly a time to take care of yourself.

Whilst there is so much I could say about the ten of swords, I think it’s important that you find your own relationship with the cards and I hope that something in what I’ve written will chime with you and set you off on your own path.  Different ways in work for different people but once you’ve found your own, there can be an amazing journey ahead of you.

I’m going to leave you with two links, both about tarot and poetry that I couldn’t resist including: