There are many different ways that animals can, and have been, used in divination.  Whilst today we are probably most familiar with animal imagery on oracle and tarot cards, as well as symbolically in astrology, they have been used in a variety of ways:

Essentially, as far as I can tell, there is a kind of divination that involves virtually any animal that we have contact with.  And that makes a lot of sense.  For our ancestors, and arguably still today, the world was a chaotic, confusing and dangerous place.  It is only natural to try and seek some order, some insight or some guidance to cope with that and where better to turn than the plants and animals that are all around us.  Whilst I’m focusing on animals today, there are many traditions which look to plants for divination – just think of how we view four leaved clovers.

It seems to be that most animal divination falls into one of a few categories; the consideration of the behaviour of the animal, the investigation of organs or other body parts of deceased animals (sometimes killed as a sacrifice), and what the animal leaves behind (tracks, excrement, shells etc).

There is absolutely no way a blog post can cover an extensive look at different methods of animal divination but I would like to focus in on a few.

Today, we snap wishbones but Etruscans believed that birds could tell the future and it’s easy to see how this can be understood; a chicken squawks before the appearance of an egg, a rooster crows just before the new day.  Another method of divination was to sprinkle grain in the ground and see where the hen pecked.  Bird migrations were another way to get a glimpse into the future.

The Etruscans also practiced haruspicy which would eventually make its way to ancient Rome.  This is where a trained person read the entrails of animals such as sheep or poultry and deciphered omens in them to answer yes or no to an enquirer.  The animal would have been ritually slaughtered as a sacrifice, butchered and then the size, shape, colour and markings of the organs (mostly the liver) were examined.  The meat was roasted and shared in a sacred meal.  This dates back to at least 3000 BC and was adopted by the Romans, and was popular with Christians and pagans into the middle ages.  Today, due to issues with slaughtering animals, eggs are often used instead. 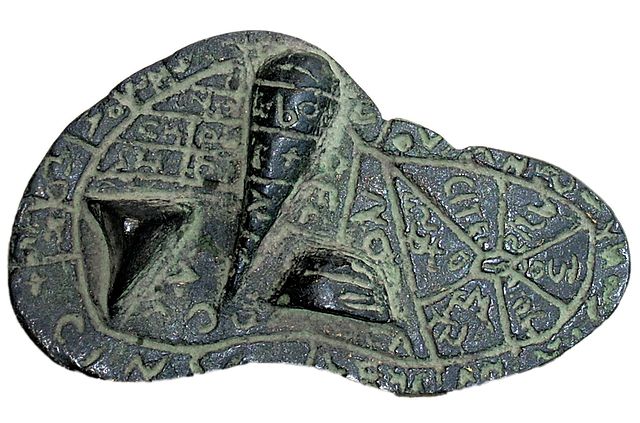 Moving to China, we find scapulimancy and plastromancy used to answer questions about crops, war, weather and so on.  In the former, ox bones were used and in the latter it was turtle shells.  In both practices however, questions were carved into the bone or shell and a hot rod was applied to it until it cracked.  The crack patterns would then reveal the answers.  They also sometimes used deer, ox and human skulls in divination.

Slightly aside from divination, animals also appear around the world as amulets and talismans.

“Since the earliest times, animal images have been employed as totems and mascots.  They have also been used in a number of special ways as protective amulets, and this ancient custom is still alive and widespread today.  The animal kingdom offers such a variety of symbolism that there are endless ways in which animal images can be called upon to perform protective duties.”
– Desmond Morris

Scarab beetles have been used as lucky charms.  Rabbits foots, whilst no longer used, are still something we associate with luck.  The beckoning cat from japan is still sold and displayed in vast numbers as protective figures.  Doves, as symbols of peace are especially popular during times of war.  Butterflies are touchstones for change.

Even though we no longer cut animals open and inspect the entrails, we still turn to the animal kingdom for comfort and protection.