I’ve already looked at the symbolism of water and of the sea and whilst, when we turn to rivers and lakes, we see similar meanings, we also encounter new ideas and extensions of ones we’ve already seen.

For example, that of the lake being a reflective mirror, perhaps more so that the sea because lakes are still, often calm and contemplative spaces.  They provide room for revelation and meditation.  The inhabitants of the lake also extend our symbolism and provide a lens though which to view the symbolic lake.  For example, a lake containing a monster is very different to that which is home to the lotus flowers which rise from the murky depths and yet are so pure.  Lakes can represent tranquillity but also mystery and illusion.  We can’t always seen beneath the surface of a lake, or at least not necessarily very far.

The depths of lakes can symbolise the depths of knowledge and wisdom and it’s worth noting here that in the tale of Ceridwen and the cauldron of knowledge, the Celtic goddess lived in a lake.

As well as monsters, lotus flowers and welsh goddesses, we find water sprites, nymphs and fairies in lakes.  Perhaps this relates to the idea that fairies live in a world under ours and lakes connect the earths surface with the surface of their world.  Similarly, rivers connect the underground with the surface and often appear to come out of nowhere in the form of springs.  It is easy to see how this would appear magical and like a gateway to another world.

Rivers, with their endless flow, have come to represent journeys and the everlasting cycle of life, death and rebirth.  The crossing of a river can mean the completion of a rite of passage and the mouth of the river is another gateway to other worlds.

When I was researching and thinking about river symbolism, I came across the following and I feel that it’s been said better than I could so I just wanted to share it directly instead of reinventing the wheel:

“Rivers can be metaphors for many things. Metaphors for life, for its twists and turns, for the suredness of its path, for our uncertainty of what lies ahead. For times of peace in deep, calm waters, for times of struggle in the turbulence of the rapids, for times of submergence when hard bedrock yields to soft sand, creating hidden whirlpools and turnholes that threaten to suck us under their untroubled surface. Metaphors for the flow of time that’s constant in its pace but relative in our experience of it: going fast when we’re paddling frantic up stream, and slow, when we’re floating down, on our backs, gazing up at the clouds, letting the current do with us what it will. And metaphors for memories. That ethereal lifeblood that courses through our lives just like a river, connecting the babbling brook to the broad estuary, giving us a place, a direction, a stage, a reflection.  Rivers flow in all of us, and us in them, and in the sublimeness of their presence we find ours.”
– Caught by the river

Turning to religion, we find a number of goddesses associated with rivers and lakes, for example an ancient Persian goddess of fertility.  Possibly the best known example of religion and rivers though, is that of Hindus and the Ganges.  In India, rivers have long been considered sacred and purifying and religious rituals are often carried out in or by rivers.  The Ganges in particular is believed to flow from the heel of Vishnu and is said to help souls of the dead reach heaven.  Because of this there are a lot of funerals and cremations which occur in the Ganges.

Bali is a predominantly Hindu island and holy water is essential to their religion and is used in many many ways including to heal the sick, in rites of passage, in worship and in cremation.

“Holy water is an agent of the power of a god, a container of mysterious force.  It can cleanse spiritual impurities, fend off evil forces, and render the recipient immune to the attacks of negative, or demonic, influences.  In Bali, holy water is not a symbol, or something abstract – it is a sekala [tangible, visible] container of a niskala [intangible, occult] power, and, as such, is sacred and holy in and of itself.”
– Fred B. Eiseman, Jr 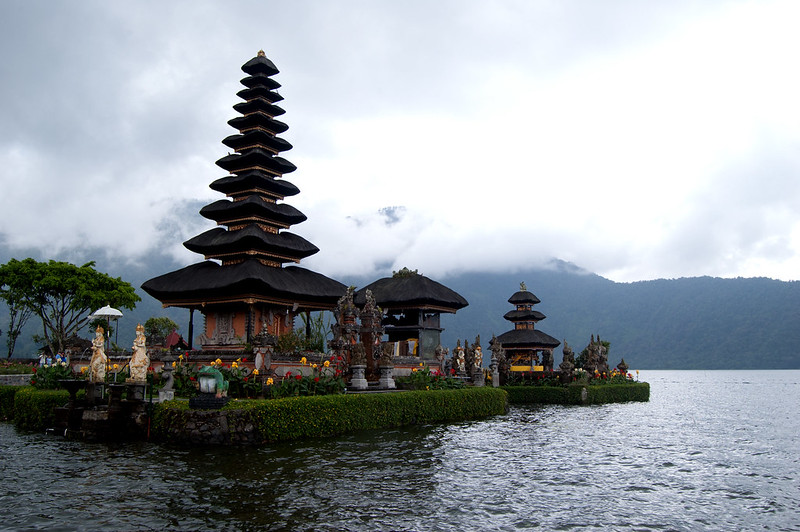 We also find holy water in many other world religions.  For example, in Christianity, it is used in baptisms and blessings as well as protection from evil.

“I know by frequent experience that there is nothing which puts the devils to flight like Holy water.”
-St Teresa of Avila

In Buddhism, offering water at shrines is a symbol of the person’s aspiration to cultivate the virtues of calmness and clarity.  It is also a reminder to seek purification and enlightenment. Here the water is not ascribed particular powers but instead acts purely symbolically to help the follower keep the aspirations at the forefront of her mind.

As I start to explore literature of rivers and lakes I am sure we will encounter more symbolism associated with these bodies of water.  Water is such a crucial part of our lives that it has found itself woven into many metaphors and interpreted in many ways throughout the world.

At breakfast, whilst watching a fisherman

To shore is safer but fish

I’m back from my holiday and have two weeks of haikus to tidy up as well as many many photos.  The above was written at 7am in Candidasa in Bali whilst sitting next to the ocean.