A lot of my turkey knowledge was informed by The Turkey, An American Story by Andrew F. Smith. If you are interested in learning more about the history of turkeys and how they came to be so important in America, do check it out. 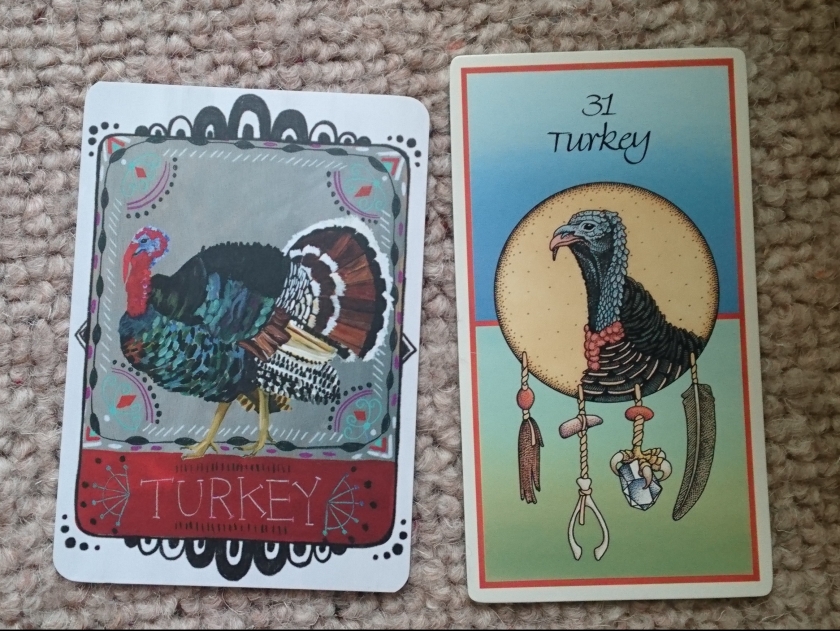 For this card, I think we need to acknowledge different cultural meanings, I mean we do for all cards but this one in particular given how Americans associate them with thanksgiving and in the UK it’s Christmas instead.

Turkeys have come to have social, historical, cultural and culinary significant in America and without them (and deer), settlers would have had a very different time and thus the world today could have looked very different.

“No other American bird has received the lavish amount of attention bestowed upon the turkey.  It is not hard to understand this fascination.  The wild turkey is not America’s biggest bird – the swan and crane are larger – but turkeys do not migrate and are abundant throughout the eastern United States… They are also handsome birds that command the attention of anyone who sees them.  A wild turkey’s habits are unusual, it’s behaviour extraordinary and its vocalisations quite singular in the avian world.”
– Andrew F. Smith

Way back, many, many years ago, wild turkeys lived in Mexico and throughout North America.  They inhabited woodlands and were nearly hunted to extinction – by the same colonists that owed their success to them…  Habitat destruction was another cause of the population collapse, again down to the colonies…  The timing echoes that of the population crash of bison and many other north American creatures.  With conservation efforts, numbers have now increased to over 7 million.

But stepping back in time again, very little seems to be known about early domestication but the Spanish did encounter domestic turkeys in Mexico in 1518 and went on to introduce them to Spain, shortly after they moved through Europe and had arrived in England by 1541.  Initially eaten by upper classes, by 1577 they had become the cheapest bird on the English market.  Come 1573, it has been noted, turkeys were a staple of the English Christmas dinner, taking a reprieve for a while but being back in vogue by 1792 when John Gay wrote:

This tradition would travel to New England and become established by the early 19th century.  Today, turkey is more associated with thanksgiving, but why?  Well, first I want to note that Thanksgiving stories are almost all lies and I was going to explain why but it’s incredibly complicated.  What I will say is that whilst thanksgiving feasts were a thing, it was probably down to the great efforts of Sarah Josepha Hale (she also wrote Mary Had a Little Lamb) that America has a Thanksgiving holiday in November.  She strongly felt that there should be a third holiday in the year (in addition to Washington’s birthday in February and Independence Day in July).  She campaigned for many years, writing to government and prominent people to try and declare the last Thursday in November as Thanksgiving Day.  She nearly succeeded in 1859 but it wasn’t until 1863 that it was officially declared by Lincoln.  In terms of why the turkey, well, as non migratory birds, turkeys were in supply and of a reasonable size in autumn and so were an obvious choice for a celebratory feast.

“The turkey was just a big bird to raise, hunt and consume until the American War for Independence, when it began to acquire symbolic value.  The new nation needed to differentiate itself from its English roots, and “American” foods began to take on nationalistic values.”
– Smith

The increasing demand for turkey would go on to change the beast itself.  Breast meat was particularly important to consumers and so turkey breeds were crossbred to increase the amount per bird.  The result was turkeys that had such wide breasts and short legs that they couldn’t mate… This means that artificial insemination was the way forward… Nothing all that natural about the centrepiece of your Christmas table…

Whilst it is an aside, it’s interesting to find out where the phrase cold turkey came from.  First, we need to know that the turkey has been a symbol of honesty for about 200 years and led to the saying to “talk turkey”, meaning to speak frankly.  Then, over time, “talking cold turkey” came to mean speaking frankly, but with cold, harsh, unpleasant facts.  This eventually evolved into “cold turkey” and was first recorded to mean the abrupt stopping of drugs in 1921.

Another turkey related fact from America 200 years ago is the pulling of the merrythought, a custom we know today as pulling the wishbone.  As we’ll see, the turkey is a creature of abundance, so before you make a wish, consider what you already have.

There are many interesting tangents I could go off on but perhaps the most relevant when it comes to the oracle card is the idea of turkeys as stupid.  As the turkey was valued for breast meat and not intellect, we have domesticated and refined a bird which is cumbersome and not necessarily bright (although recent research suggests that chickens are cleverer than we thought so maybe the same will prove true for turkeys).  Anyway, the alleged stupidity of turkeys led to the phrase gobbledygook, meaning “language that is meaningless or is made unintelligible by excessive use of technical terms”.  Are you communicating clearly and simply or are you over complicating things and convoluting the message?  Perhaps you’re being underestimated or even underestimating yourself.

The reality is that wild turkeys are inquisitive, curious creatures which are interested in things that don’t benefit their survival, showing us an appreciation of things just for the joy of it.  They are playful and despite their reputation as stupid, they have a profound vocabulary which includes specific vocalisations for individual predators.

Turkeys are natural foragers and eat almost anything they can find (again we have the theme of abundance popping up), what are you overlooking or missing in your hunt for something that matches the image in your head?  Have you fallen into the rom-com trope of ignoring the best friend because they don’t look like your idea of love?

Whilst most birds are associated with air, I feel the turkey is more of an earth card – whilst they have wingspans of up to 6 feet, they are not especially aerodynamic or graceful when they do fly.  Instead they use their wings to help them jump into trees for safety.  Perhaps you could bring a dose of reality to your lofty ideas?  Bring yourself back down to earth.

Like the bison, the turkey is a symbol of fertility, gratitude and abundance.  They were used in ritual to ensure a good crop and the various parts of the turkey were used in many ways.  Obviously they were eaten as poultry, but they also provided eggs and feathers which were used to make coats, blankets and umbrellas.  They were also turned into hearth brushes, quills, dusters and used to stuff mattresses and pillows.  The bones were carved into spoons and beads.

They are also about sacrifice, giving yourself so that others can live and harvests which puts me in mind of the six of pentacles in tarot.  Reversed, this reminds me more of the 4 of pentacles and holding on so tightly to what you have out of fear of losing it that you can’t get anything more.

“In present day urban life, we are taught to acquire and get ahead.  The person with the most toys wins the game.  In some cultures, no one can win the game unless the whole of the People’s needs are met.”
– Medicine Cards

Giving and receiving, sharing and enjoying are important here.  To give something away can be a gift to yourself.  What is it that you have to offer the world?  What is it you are abundant in?

Questions to think about when the turkey shows up include what are you sacrificing, is it deserving of your sacrifice is it the right thing to be sacrificing yourself for?  What I have in mind as I type this is a job that’s draining the life out of you, demanding all your time and energy and ideas but which gives you nothing in return; no sense of satisfaction, no acknowledgement etc.  On the other hand, giving all your time and effort to a career you love is a sacrifice that might be worth making.