Moving up a little in the oceanic plant world, we get to algae. There are two categories, micro algae which are, as they sound, tiny, and macro algae which is where seaweed fits it and is what I’ll be looking at.

We tend to think of seaweed as the annoying, slimy stuff which litters the beach and wraps around our feet as we try to paddle in the sea but seaweed is a very diverse term. In general, seaweeds need saltwater, light to photosynthesise and somewhere to hold onto.

Algae are used in so many ways and can be found all around us. In the late 17th century it was discovered that soda and potash (important to the soap and glass industries) could be extracted by burning kelp. Today, we find algae in cosmetics, in soaps, in paints, as fertilisers, in foods as well as as a food item itself for both humans and animals.

Like with other marine life, algae may also have useful scientific properties. For example, some have developed protection from UV light and understanding the process and chemicals involved may help develop new protective products. Algae can also help open our eyes to other ways of being, pushing our thinking, our expectations and our world view. As a species we are terrestrial centric and macro centric, focusing heavily on land based large species such as trees and lions but there is so much we can learn from other species, including the under appreciated algae.

And talking of underappreciated… Seaweed allowed women to carve out a tiny niche in the scientific world in the 19th century, a realm dominated by men. 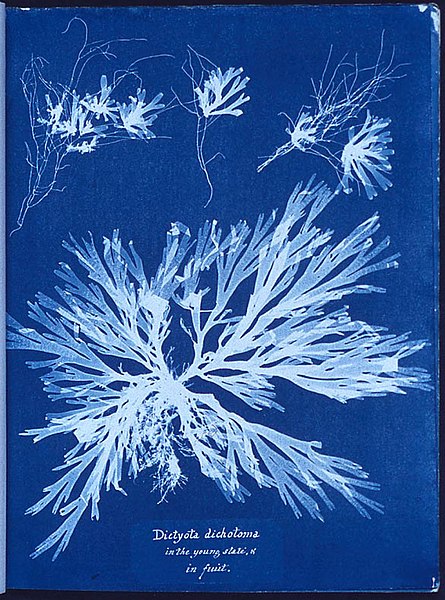 Whilst the hobby of collecting seaweed can be traced back to the 17th century, it grew in popularity in the 19th century. And in doing so, it created space for women to engage in science and, to a limited extent, to contribute to science.

Male seaweed collectors were able to join in with scientific endeavours but women were encouraged to see it as a hobby. Seaweed scrapbooking became popular and it’s alleged that even Queen Victoria dabbled in it. It was framed as a hobby rather than a scientific undertaking and the social aspect was emphasised for women. However, some women managed to make a name for themselves:

Griffiths was an ‘amateur professional woman of science’ who specialised in collecting seaweed and who raised awareness of the diversity of marine plant life in Devon where she lived.

Her reputation proceeded her and a species of red seaweeds was named for her in 1817. She was also able to correspond with leading algae experts which I suspect was a significant honour in her day.

Gatty was a children’s book author who took up seaweed collecting when she was convalescing by the coast in 1848. She eventually published an illustrated field guide to British seaweeds, an endeavour which took 14 years and included 200 specimens.

However, instead of placing herself as scientist, she framed herself as interested in seaweed because it was an expression of God creating beauty in nature.  She would also use her children’s books to preach this message, teaching that god and nature were not to be treated separately and she argued against Darwin’s theory of evolution.

Like Gatty, Atkins published a book about seaweed but this is also of note as it was the first photo illustrated book ever. She used cyanotype prints to document different species and part one was published in 1843.

Women still play an important role in seaweed collecting; in most developing countries, the majority of people involved in seaweed farming are women.  In Zanzibar, for example, it’s estimated that 80% of seaweed farmers are women.  The seaweed grown and gathered by these women becomes our toothpaste, food additives, shampoos and medicines.  Definitely food for thought next time you find yourself on the beach getting tangled by its slithery ‘arms’!